The Cathay Cineplex (Official), The Picturehouse 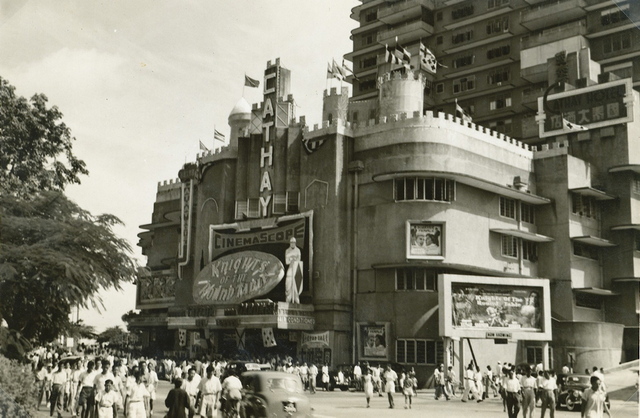 Cathay Cinema opened in 1939 and remained a single screen until 1990, when it was refurbished and converted into 2 screens. A third screen was added in 1996.

It re-opened in 2006, having been transformed into a multiplex cinema and shopping arcade. The original facade of the Cathay Cinema is designated a Listed building.

A vintage exterior photograph taken just after the end of the war in 1945 of the Cathay Cinema. The photograph is courtesy of Fred Plant taken from the Cinema Theatre Association website:
View link

A late 1940’s view of the Cathay Cinema:
View link

The Cathay Cinema opened in October 1939 with Ralph Richardson in “The Four Feathers”. It had a seating capacity of 1,300 and was the first public building in Singapore to have air conditioning. It was closed in 1998. The 220 seat Picturehouse screen closed in 2000. In 2001 work began on building a new skyscraper at the rear of the building (replacing one built in 1939).

Within the new skyscraper are now eight newly built screens located on the fifth and sixth floors. Seating capacities are;290(THX certified), 206, 132, 132, 162 and 248. These and the refurbished original screen now known as the Grand Cathay (seating 600) plus the luxurious Picturehouse screen (which now seats 82) re-opened on 26th March 2006 and the complex is known as the Cathay Cineplex Cinemas. The complex is open daily from 10am and runs 24hours non-stop at weekends and public holisdays.

A recent exterior photo of the Cathay is at

Amazing architecture and lighting of the Cathay Cinemas at: http://www.flickr.com/photos/metropol2/2058794209/

A vintage photograph of the Cathay Cinema in 1954:
View link
Same view at night:
View link

Visitors to Singapore may enjoy a visit to the Cathay Organisations Gallery, located on the first floor of the shopping mall just behind the Cathay facade. A very extensive company collection is displayed, including records of former cinemas operated by Cathay in the region – they once had 45, photos, film memorabilia, cinema and home projectors and still cameras. Strictly no photography here however.