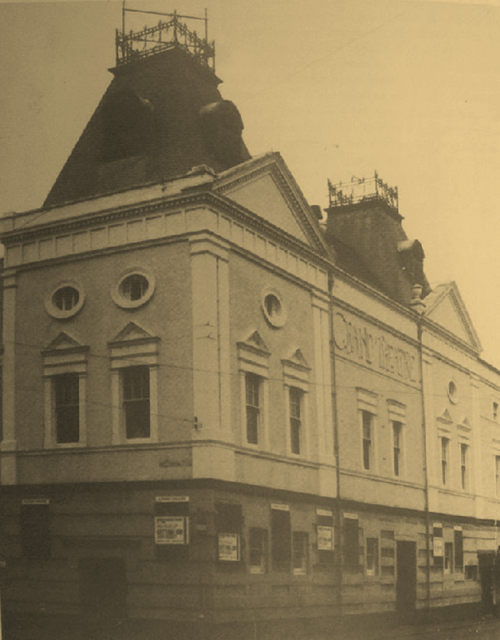 The Swansea Grand Theatre is one of the most beautiful theatres in the country. In 1982 to 1987 it was completly renovated with some alterations including the raising of the auditorium roof. A complete new backstage area was built doubling dressing room accomodation and stage area.

Very soon after the Grand Theatre was opened in 1897 it was turned into one of the city’s first cinemas and renamed the Swansea Cinema, though this was only for a brief time.

It returned to live show use until 1933 when it became the Grand Cinema, with a seating capacity given as 1,200. This use continued until 1947 when it reverted back to live theatre use and today is a major live theatre venue.

The Grand Theatre is a Grade II listed building.

It screened early Bioscope shows and from 1934 until 1947 it operated as a a full time cinema (listed in the Kine Yearbooks as the 1,200 seat Grand Cinema).

The Grand was the flagship theatre of the Willis Circuit and was certainly owned and operated by that company up until at least the mid 1960s. I can remember visiting the theatre some time in the early 1960s,when a stage show was taking place,and being shown the operating box. It was in an untidy condition and clearly had not been used for projecting purposes for some time.

Towards the end of Willis era at the Grand, the manager was a gentleman named John Chilvers. He was reportedly one of the busiest men in the South Wales cinema /theatre industry. Not only did he manage the theatre but also acted as a producer to the Grand repertory company that performed a wide range of plays at the theatre. At pantomime times the Grand staff were given the task of fly posting advertising bills where ever they could find some wall space to paste them. One Christmas, both the managers at The Elysium and the Albert Hall were surprised to find the Grand pantomime posters pasted to the walls of their respective halls. The posters were quickly removed and protests made.

John Chilvers went on to become the administrator and artistic director of the Grand Theatre right up until his retirment in the mid 1980’s.
He directed every pantomime at the Grand from the sixties onwards and they were the longst running in the whole of the UK running until mid March every year. He also directed one of the highly respected rep seasons of the time.
Mr Chilvers fought tooth and nail to save the theatre for Swansea. It had already lost its other live house, The Empire.
In the mid 80s his dream was brought to life when the theatre received one of the biggest ever arts grants from Europe and it went onto be developed into one of the most technically advanced houses in the land and still is.
The auditorium was kept 90% intact but all the surroundings were completely demolished and the original auditorium is now encased in a new building. It is far from the best design but at least Swansea still has its Grand Theatre.
Cardiff New Theatre had a much more pleasing refurbishment a few years later but they are unable to extend the theatre in anyway as was The Grand.

Sadly, Swansea council have let it get into a very sad state in the last 10/15 years and it is now in dire need of refurbishment, inside and out

I was with Swansea Little Theatre in the 1960’s assisting with stage lighting their plays at the Palace Theatre. We moved out around 1962 and staged plays at the Royal Insitution with a fit up and also one, Little Women, at the Grand Theatre. The sage lighting board was by Atlas and they used tubes for the footlights and batterns, the dips were either tungstan or fluro. tubes. The only other board I ever saw like this was at the Sophia Gardens Pavilion, Cardiff. Adverts were screened at the Grand with the house lights up during the interval on some very rough Kalee 20'sand projected onto the safety curtain.