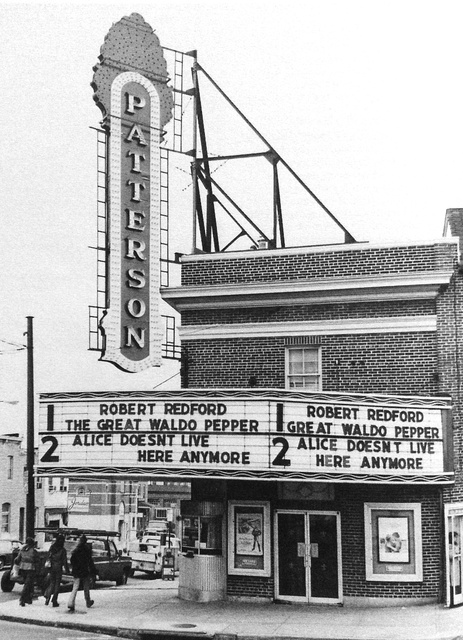 The 1,200-seat Patterson Theater is one of Balitmore’s last remaining historic movie houses. Opened in 1930, the John Zink-designed theater was nearly destroyed by fire in 1958, but was saved and continued to show movies for several decades before it closed.

In 1998, the Department of Housing and Urban Development awarded Creative Alliance, a non-profit performing arts group, with a $7.5-million grant to transform the old movie house into the Patterson Center for the Arts.

The renovation/restoration was completed in 2003, and the Patterson Performing Arts Center is now open.

The building now houses the auditorium, a 2,000-square-foot gallery, studios, classrooms, meeting halls, and a cafe.

The Patterson is no longer closed. It re-opened on May 16th, 2003, as an arts center and theater operated by Creative Alliance

Their web site describes the facility as providing two galleries, a 250 seat flexible theater, a classroom, media lab, offices, and live/work studios for artists. The address is now given as 3134 Eastern Avenue, Baltimore MD 21224, and the telephone number as 410-276-1651. Their e-mail address is

The web site’s brief history of the theater says that there was an earlier Patterson Theater built at the same location in 1910, which was demolished in 1929. The current building was opened in September, 1930, twinned in 1975, and closed in 1995. When opened in 1929, the Patterson was operated by the Grand Theater Company, an affiliate of Durkee Enterprises. The history page also mentions the marquee and the art deco sign, lighted by “a plethora of bulbs,” but it appears to be referring to the blade sign only. At least that feature was able to be saved and restored.

This theatre’s marquee can be seen with other Baltimore cinemas in John Waters' “Cecil B. Demented” – the marquee advertises “Karate Marathon: All Action All The Time Admission One Dollar”.

Here is a March 2009 article from the Baltimore Sun:
http://tinyurl.com/c82jna

Another article. The renovation was completed in 2003 and Creative Alliance has been hosting events there ever since. Here’s an article about the renovation.

Their official websaite is:

If you ever go to the Patterson and find yourself needing to take a bus home, it’s easy to figure out where to wait for one.

Article about the Patterson & others.