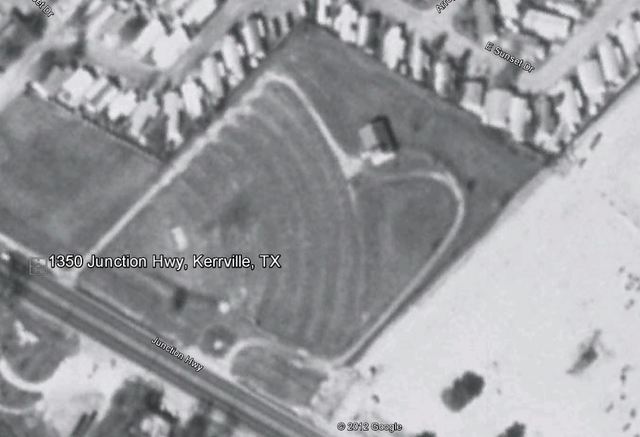 Here is a March 1959 ad from the Kerrville Times:
http://tinyurl.com/kqsqty

Address should be in the 1350 block of Junction Hwy. Next door to you guessed it, another Wal-Mart. But not on the old drive-in lot, but next to it. Between McDonalds and Culvers.

However, This Theater Is Noted To Be One Of The Dangerous Drive-Ins In The State Of Texas As A State Headline For A Homicide At The Kerrville Drive-In Only Appeared A Few Times In Many Newspapers In Texas.

In June Of 1979, A Lady Ticket-Taker Who Worked At The Kerrville Drive-In Was Beaten Up, Burned, And Murdered At Her Job By Randy Lynn Woolls, 29 Of Medina, During A Robbery-Slaying Incident. Later In October 1979, Randy Is Plead Guilty By The Juries In San Angelo Due To The Killing Of The Ticket-Taker, Served 7 Years In Prison, And Randy Was Executed On August 22nd, 1986.