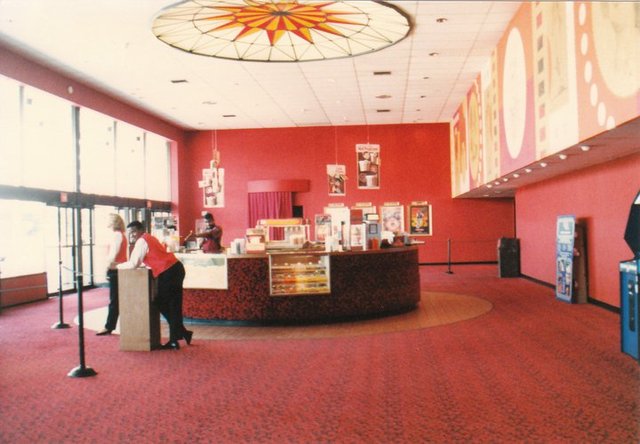 Loews first foray into the Dallas-Fort Worth metoplex, Park Central opened in 1977 with 2,500 seats. It was a free-standing quad theatre in the midst of the Park Central development. Although the development featured hotels and restaurants, it mostly grew into an office park.

The theatre lobby was done in dark red and earth tones typical of Loews Theatres at that time. A Patrick Carey mural of old movie stars hung above one wall of the lobby. In the center of the lobby beneath a fake skylight was a circular concession stand.

The back of each auditorium was the smoking section, and ashtrays were built into the backs of the seats.

When Dolby Stereo became the dominant sound format, the Sound 360 system in auditorium one was modified to play Dolby Stereo.

The smoking section and ashtrays did not last long.

Initially successful and much more elegant looking than the Northpark and Prestonwood area theatres, Park Central’s business slowly declined in part due to its poor location in an office park. Loews maintained the theatre well, but during the 1980’s, they did not upgrade it with THX, computerized ticketing, cupholder armrests, Ultra Stereo, or any other amenities added to the Northpark and Prestonwood area theatres.

In the early-1990’s, the health department condemned the original concession stand, and Loews replaced it with a large white stand running the length of one wall in the theatre. They changed the lobby wall coverings to blue and gray, and they added computerized ticketing to the theatre along with an automated ticketing machine. After steadily declining through the 1980s, attendance briefly improved following the partial remodeling but began to decline again after about a year. During the time the company was known as Sony Theatres, this theatre retained the Loews name.

When Loews opened their nearby Keystone Park megaplex in 1996, they were contractually obligated to close Park Central even though it was still turning a six-figure annual profit. The theatre sat empty for five years as a tenant was sought. In December of 2001, the roof over auditoriums three and four collapsed. By the end of the month, the rest of the theatre had been knocked down before it fell down.

“Loews first foray into the Dallas-Fort Worth metoplex…” – sorry, not so; Loew’s opened the Downtown theatre at 1100 Elm in 1969; Loew’s took over the ownership of the Hope Theatre, built in 1921, the following year and renamed it the Melba. The company had had a long, if spotty, association with the Dallas area by the time this theatre was built.

Well likely their first ground up build of the multiplex era…?

I worked at this theater as an usher during my junior and senior years in highschool, from about September of 1978 to May of 1980. It was a great place and we had a lot fun. We enjoyed free popcorn and drinks and could recite the lines to every movie because we got to see them over and over. A lot of now classic movies played there including ‘Coal Miner’s Daughter’, ‘Star Trek’, ‘Moonraker’ (which we had to dress up for), ‘Halloween’, etc., etc., etc. We even had Arnold Schwarzenegger’s first movie, ‘The Villain’ with Kirk Douglas. What a stinker!

I can’t imagine that working in the new multi-screen theaters is anywhere near the experience we had in this “small” theater.

According to Boxoffice,Jack Helsley was the first manager there.

Loew’s did not take over the Capri downtown—McClendon theatres did—but did take over the Delman in north Dallas. The Hope Theatre was taken over early in its life by Howard Hughes who later ceded the theatre to Hoblitzelle/Interstate where it was renamed the Melba. It premiered 3-D in Dallas and not long after became Texas' first Cinerama theatre. Then Trans-Texas theatres took it over and ran it until 1970 when McClendon turned it into a 7-plex—tripled the original theatre and built 4 small theatres in the basement of the building.

When I moved to Dallas in 1983 this was the first theatre I visited. I saw Octopussy in 70 mil. This was the most beautiful movie theatre I’ve ever seen and sorry to see it gone.I also saw Supergirl Thanksgiving day 1984. The last movie I saw here I think was Witness.

I remember the smoking section when a friend and I saw Star Trek in search for Spock.I love this place so much,I’d love to have a poster of the lobby hanging in my office. I wish there were photos of the seating and screen sections

jamestv, the intro for the Melba/Capri, if that’s where your info comes from, contains an error: it incorrectly states that Interstate took over this theatre and renamed it Melba; Loew’s was the second owner, taking over in 1922 from First National Pictures and their financial backer from Houston, Jesse Jones, whose mistress – First National Pictures star Hope Hampton – Jones named the theatre for. Loew’s renamed it Melba upon assuming the lease on the property from First National. Interstate assumed the lease in about 1939 or ‘40. McLendon took control under the Trans-Texas banner in 1960 and renamed it Capri. Loew’s takeover of the Delman from its original developer/owner (also from Houston, where he had originally built and operated another Delman) post-dated McLendon’s takeover of the Melba by a decade or more.

Was Loews Park Central the Dallas venue in which the Spring 1989 Director’s Cut re-release of “Lawrence of Arabia” played?

Was here in the mid-80s (briefly) as an Assistant Manager. Split my time between here and the Loews in Plano.