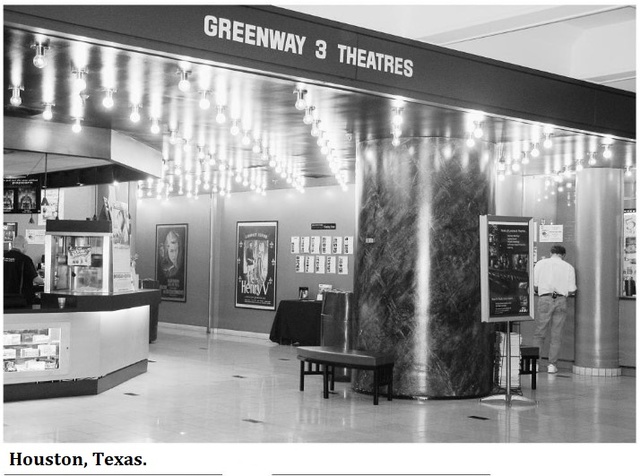 This multiplex was originally named the Greenway 3 Theatres, so two screens were added later. It opened at noon on February 1, 1974. The premier features were Goldie Hawnâ€™s â€œButterflies Are Freeâ€ (screen 1), Ernest Borgnineâ€™s â€œThe Neptune Factorâ€ (screen 2), and Woody Allenâ€™s â€œPlay It Again, Samâ€ (screen 3). The correct zip for this address is 77046.

I worked here in the early 1980’s after dropping out of Rice University. I had a great time. I later graduate from Rice (1984).

The Greenway was a Landmark Theatre & has, sadly, been closed for several years now.

The Greenway was originally operated as an AMC first run, then became an AMC discount house (it was $1.50 when other discount houses at the time were $1.00). When AMC vacated, Landmark theatres came in and took over. It was a 3 screen theatre, no screens were added. AMC actually had Radio Shack amps and Realistic speakers for surround in one auditorium here (no joke). Only one house had stereo, a Dolby CP50 that ran in bypass most of the time. The other two houses were mono. The projectors were cinemeccanica vic 5, and christie autowind platters.