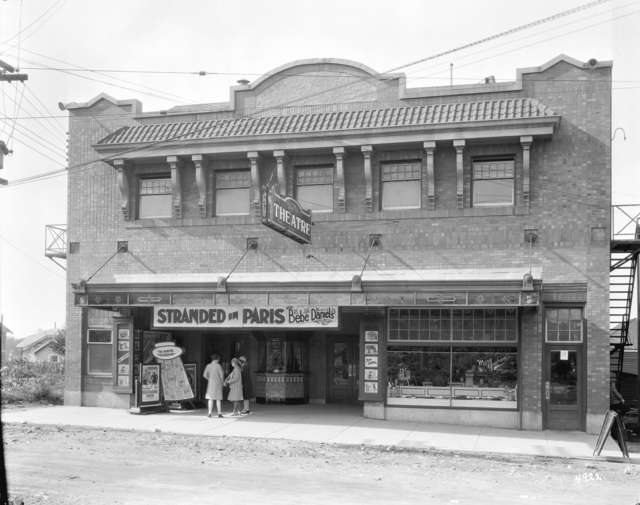 Opened in 1929 and closed 1955. Any further information would be appreciated.

After the Alma stopped showing films in 1955, it sat vacant until Bobby Taylor and Tommy Chong (famous for being part of the comedy duo Cheech and Chong) opened a Vancouver Nightclub called Blues Palace at the old theater site. Ike and Tina Turner Revue had a run there as well. Although it hasn’t been substantiated, there were rumors that a young unknown Jimi Hendrix performed at this site. The theater has since been demolished and now houses a strip mall.

Not so fast. The theatre was dismantled and resurrected in Maple Ridge at 12471 254th St. It is now a riding ring and used by the North Fraser Theraputic Riding Association (NFTRA)

@MarkKramer: I would have to disagree. The Alma was a brick masonry building. When the owners decided to raze it, it was bulldozed. Dismantling it to be resurrected elsewhere would have been costly. In addition, There are no Brick buildings at NFTRA.

The Alma Theatre was built by a Mr. Langer, who built 3 or 4 other suburban theatres in Vancouver including the giant movie palace the ORPHEUM THEATRE! Mr. Nathanson president of Famous Players at the time said “We must stop Langer sooner rather than later — the Orpheum NEVER would have been allowed to be built anywhere except the West!! Famous Players tried to squeeze Langer into a partnership but he refused insisting on outright purchase only. One of the other theatres along with the Alma was the Kerrisdale. These little neighbourhood theatres are now long gone!!

The Alma Theatre became a roller skating rink after it was closed as a movie theatre, and until it became a music venue. I remember wearing my first earrings – tiny roller skates – when I went there. I also remember seeing the Ike and Tina Revue. I’m sorry that the city didn’t value this little gem more than yet another strip mall.