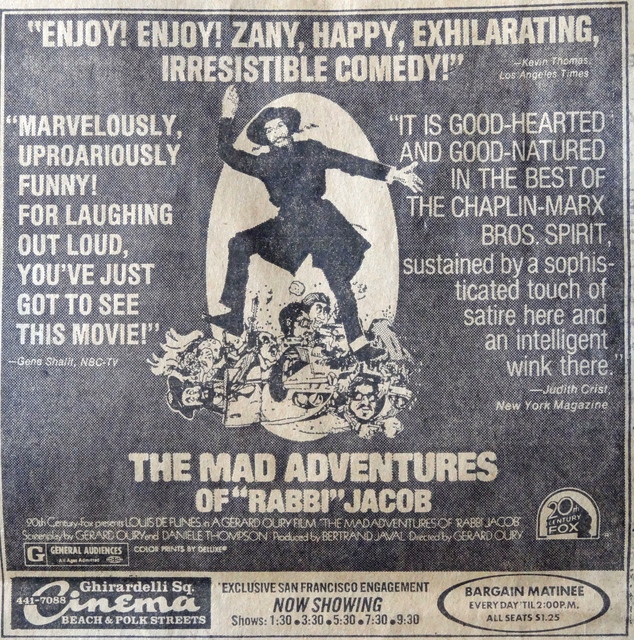 The Ghirardelli Square Cinema opened August 20, 1971 with “Two Lane Blacktop”. It was operated by General Cinema. It was closed in late-1986. It briefly reopened as the Waterfront Theatre in April 1987.

This theater closed in the 1980’s. Last operator was General Cinema Corp. It was located in the Ghiradelli complex, which was once the Ghirardelli Chocolate factory in San Francisco and is now a popular shopping complex on the west end of San Francisco’s Fisherman’s Wharf. The theater itself had a red brick interior and was single screen. I had seen the film “Rollercoaster” in Sensurround in 1977 here, great sound system.

The Ghirardelli Cinema opened on 20 August 1971 with the first run feature, Two Lane Blacktop, and continued to operate as a first run venue until it closed in late 1986. In April 1987 it briefly reopened as the Waterfront Theatre.

The Ghirardelli was a single-screen theater.

Ghirardeli’s status should be “Closed;” its number of screens should state “Single Screen.”

I was the projectionist at the Ghiradelli on and off in the 70’s It had the best projection booth of any theater I have been in. The theater was bulit to be the new “Hungary I” A nightclub. When that failded it became the Ghiradrlli Cinema, and the manager’s office became the projection booth.It had air conditioning,a large bathroom with a shower.
I think the trouble it had was the fact that parking was almost impossible.It was in a tourist part of town.

I think Cosmo is referring to the “Hungry i”, a noted comedy club, and not the country in Eastern Europe.

An article in today’s San Francisco Chronicle mentioned that the film Cruising was supposed to open here on Feb 15, 1980. Due to vandalism & protests, General Cinema cancelled the booking & it opened at the St Francis on Market Street instead.

I loved this theater. I remember seeing the David Byrne concert “Stop Making Sense” with a friend here in the early 80’s, and we had a blast. Wish some of these smaller theaters were still open, I think they would have a substantial audience.

I remember the jazzy General Cinema (?) teaser reel that opened shows in this vaulted theater. Great place to see films, though the cavernous interior reflected laughter so much that I could barely catch every third line in YOUNG FRANKENSTEIN. It was close to home (North Beach), so walking distance for me.

This opened on August 20th, 1971. Grand opening ad in the photo section.