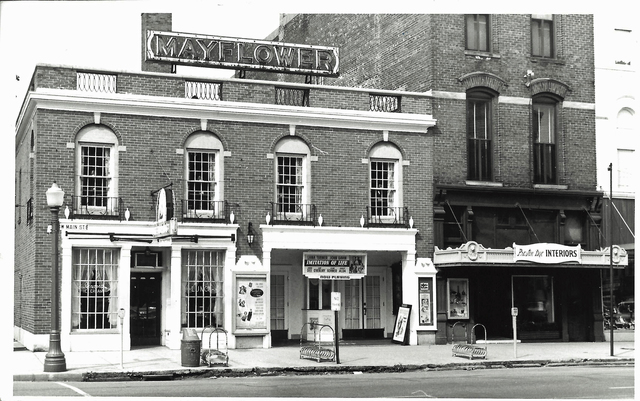 In July 2012, new owners took over the building to convert it into the Mayflower Arts Center, an art gallery and a future presentation space. Two of the screens are currently unused, and the presentation space will be created in the third screen, a 135-seat theatre which will also screen occasional art films.

The current multiplexed Mayflower and the original theater are one and the same. The Mayflower was built as a single screen theater with a 2 manual, 5 rank Style 150 Special Wurlitzer organ, opus 1787, installed at the time it opened. The organ was shipped from the Wurlitzer factory on November 18, 1927. It was installed in two chambers on either side of the proscenium, which was somewhat unusual for an organ of that size. The theatre was listed as “New Theatre, Troy, Ohio,” in older versions of the Wurlitzer opus list, and New Theatre is written in blue crayon inside one of the windchests. The Mayflower opened as The Mayflower Theatre on Wednesday, February 1, 1928, with the Wallace Beery movie, “Wife Savers.” It had a small orchestra pit and featured two orchestras on opening day, plus Edward Dollinger on the “$15,000 Wurlitzer organ” and “a varied program of music and vaudeville numbers.” It had a small stage and did not have a fly loft. There was a large empty room over the stage which connected the two organ chambers, and had a door which opened into the air about 17 feet above the alley below. I purchased the organ from the original owner of the theater, Mr. Chris Pfister, and removed it in the fall of 1973. At that time, Mr. Pfister was old and in poor health, and was leasing the theater to Alan Teicher, who bought it after Mr. Pfister died. When I removed the organ, the theatre was completely intact with a single screen. A wide screen frame had been installed in front of the original proscenium, extending to partially cover the organ grilles on either side. The front was completely covered with drapery, so the proscenium and organ grilles were not visible. The organ console sat on the floor to the right of the small orchestra pit railing, fully exposed at all times. The multiplexing occurred years later. I understand that the original auditorium is mostly intact and is the largest of the theatres. One screen was put on stage, and I believe the other two were put in what was formerly a storefront to the west of the theatre’s main entrance, but I wouldn’t swear to this. The store was a barber shop in 1973. There was no marquee in 1973 and no evidence that there ever was one. I saw the theatre on the outside in the summer of 2007 and it looked much as it did in 1973. I haven’t seen the interior since 1973. I still own the organ, and it is warm, dry, and safe. Unfortunately it doesn’t play yet, but hope springs eternal. I hope this information is helpful. At this time, I don’t have any further details, such as the name of the architect.

when this theater was open in the 2000’s it dawned an 40-45 seat screening room with a projector with reel to reel mounted on the wall behind it in the front where the Law offices used to be, and it was tucked behind the concession stand. You walked down a hallway and ran into a 100+ seat theater, and then you went to the right down a narrow hall to the final theater which featured the original screen on the back wall. Instead of splitting this theater down the center it was split in the front and back.

Restrooms were in the basement, and were often cleaned with a garden hose, and people complained constantly about film pacement and cleanlieness..

at one time it was showing .99 movies on weekends only and finally closed for good, which is odd because i believed the building was actually owned by Tiecher, his son lived in the apartment above,

I purchased the Mayflower Theater from Mr. Teicher in July 2012. It is now called The Mayflower Arts Center (www.MayflowerArtsCenter.com) and will feature gallery and exhibit spaces, artist studios, classrooms, and eventually a performance stage. We are trying to learn as much about the history of this beautiful treasure as possible. Thank you for the information you’ve posted here!

Architects were Schenk & Williams, from Dayton, Ohio, as noted on the original blueprints I found carelessly discarded behind the stage. I’m in the process of trying to preserve them. Here’s wiki link to architects: http://en.m.wikipedia.org/wiki/Schenck_%26_Williams

Apparently the Mayflower Theatre’s organ was still in use at least as late as 1940, when the October 26 issue of The Piqua Daily Call made reference to “…Donald Wells, organist at the Mayflower theater….” Wells was visiting Delaware to attend a concert by French organist and composer Joseph Bonnet.

On the 1931 Sanborn, the auditorium has a note: ‘Steam Beams’. I assume this is a goof, and the surveyor intended to write ‘Steel’, but if it means something, I’d love to know.

This article about the Mayflower says that the house opened on January 31, 1928. The article does not mention the Mayflower’s “steam beams.” Perhaps they were only a local urban legend.