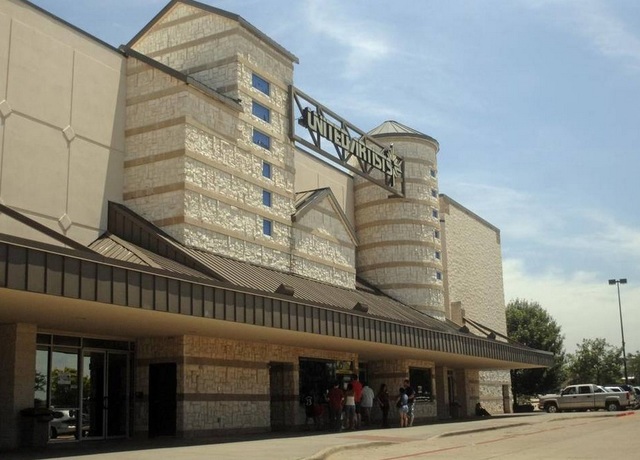 This opened on February 28th, 1997. Grand opening ad in the photo section.

T he theater became the Regal Fossil Creek Stadium Cinemas 11 which went on hiatus on October 8, 2020 along with all other Regal / UA / Cineworld theatres which had reopened following the March 16, 2020 shutdown during the COVID-19 pandemic promising to return in 2021. Woodbine Development Corp. began Fossil Creek development talks in 1978 and announced the project with United Artists on board in 1996 with a groundbreaking February 28th.

The $10-million theater’s concept was similar to the UA Galaxy in Dallas which had opened in May of 1996 going for technology including VR gaming and THX-certified auditoriums. The theater featured stadium seating and two levels to conveniently get to the the top of the largest auditoriums. The facade of the theatre was different from other UAs. Dan Ogden of UA explained that the limestone front was designed to resemble the Hill Country of North Texas. The UA Fossil Creek opened with 2,800 seats exactly one year after the groundbreaking. It launched on February 28, 1997.

While much of the attention was going to 24- and 30-screen megaplexes of the era, UA was more conservative building 9-11 screen complexes including its Lakepointe 10 theater in Lewisville opening in December 1994 followed by a similar facility in Grand Prarie opening August 1995, its Eastchase debuting in 1997 and its Macarthur Marketplace in 1999.

Philip Anschutz took over controlling interest in United Artists and Regal, as well as Edwards Theaters in October of 2001 and the economy went south in an era when too many theaters were in the Dallas-Fort Worth marketplace. Regal began a retreat in the DFW marketplace that was losing to Cinemark and AMC and had claimed General Cinema, once a dominant factor in the market. Regal/UA would shed older, non-descript 6- and 8-plexes along with the McArthur Marketplace.

In January of 2007, the theater had a soft name change to the Regal Fossil Creek 11. When the theatre property was sold by Kimco to United Property of Southlake along with 10 other theaters including the UA Grand Prairie in June of 2015, the real estate company announced that seven of the theaters including the UA GP would shutter. In fact, over a relatively short period of time, Regal would shed its entire 1990s DFW-area portfolio with the exception of just the two destination theaters it had considered to be the most technologically advanced in the Galaxy and the Fossil Creek.

Both theaters were converted to luxury recliner seating in 2015 to try and stay relevant in a marketplace being dominated by cinemas offering in seat dining and/or entertainment options such as bowling centers or advanced arcades. For the Fossil Creek, it also had to compete with the nearby Cinemark Alliance Town Center about four miles away. Meanwhile, the Fort Worth property would get recliner seating in its auditorium and officially become the Regal Fossil Creek Stadium Cinemas 11.

The Regal Fossil Creek closed on March 16, 2020 for the COVID-19 pandemic and reopened in September of 2020 along with the Galaxy In Dallas now with ScreenX. But as noted above, it closed October 8, 2020 – three days after the Galaxy – with a hopeful message of a potential reopening of 2021.

Regal closed here on October 8, 2020. Regal had placed it on the list of theater relaunching on May 21, 2021 only to reverse course and placed it on a “to be determined” opening list.

Regal closed here for the COVID-19 pandemic a second time on October 8, 2020. Regal reopened the venue on June 25, 2021 to coincide with the opening of the ninth installment of the “Fast and Furious” franchise.