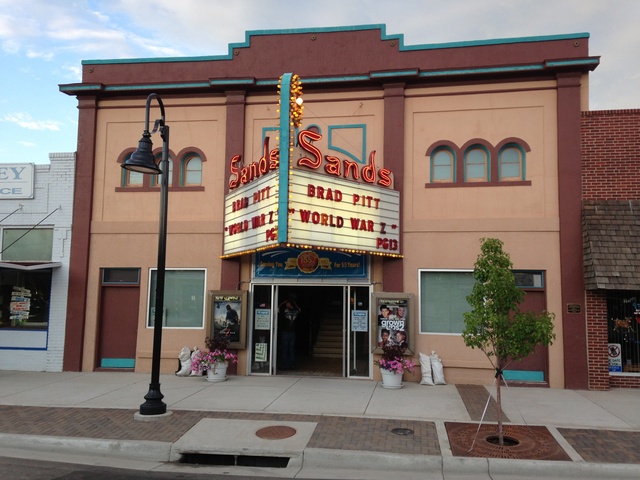 The Emerson Theatre was opened March 4, 1916 by Charles W. Emerson on Clayton Street at Edison Street in Brush, Colorado. The original seating capacity was 360. It was renamed Sands Theatre in 1966. The Sands Theatre was added to the Colorado Register of Historic Places in 2005.

This theater is nothing short of a gem on the Colorado plains! It is owned and operated by Mr. Joe Machetta who bought the theater in 1958. He grew up around movie theaters and is also related to the Kelloff family who owned and operated several movie houses and drive-ins in South Western Colorado.
The theater is very original inside and also features Mr. Machetta’s quality decorating and updates. The seats are very comfortable and appear to have been installed new in the late 1970’s. The facade was completely restored a few years back. The theater was originally known as The Emerson and it had been closed for a few years when Mr. Machetta purchased it. He changed the name to The Sands in honor of The Sands Hotel as he is a major rat-pack fan. The booth features two immaculate Super Simplex projectors running 6 thousand foot changeover with xenon lamps.
The theater is amazingly clean and well run. The staff is small and very friendly. Mr. Machetta can usually be found in the box office selling tickets and he is aided by one of two friendly projectionists and the concession stand always has one or two very nice & polite people (usually local high school kids) running it. The theater features a curtain that opens before the feature and closes after and is also one of the only theaters I’ve seen that still uses its original glass slide projector. This projector makes its big scene afer the first reel, projecting “The concession stand closes in 5 minutes” in the lower right hand corner.
If you want to visit a beautiful, historic theater complete with old-fashioned small town charm, The Sands is for you!

Here is another photo:
http://tinyurl.com/ybw2v82

This PDF of a document prepared for the Colorado State Register of Historic Properties has a fairly extensive history of the Emerson/Sands Theatre. It includes the information that the house opened on March 4, 1916. The house originally seated 360, with 300 seats on the main floor and 60 in a small balcony.

With the addition of a stage and the closing of the balcony in the early 1960s, plus subsequent re-seating with larger seats, the seating capacity of the house has been reduced to 226. The house was renamed the Sands Theatre in 1966.

The October 16, 1915, issue of The American Contractor had this item about the Emerson Theatre:

The Baerresen brothers were active from 1884 until around 1928, and were one of Denver’s more prolific architectural firms of the period. Many of their works are still standing.

Boxoffice, Jan. 29, 1949: “John H. Roberts is doing extensive remodeling to the interior of the Emerson, Brush, Colo., and is installing new Simplex and booth equipment, bought from National Theatre Supply”

Joe Vogel was right about the thoroughness of the Colorado Historical Society’s PDF. It moved away from his link, but the Internet Archive link still works.

Boxoffice, March 16, 1957: “John Roberts has closed the Emerson, Brush, Colo., and will not open the drive-in there this summer. Brush is no doubt the largest city in the (Denver) territory without a theatre. The 1950 population was 2,431.”

Boxoffice, May 4, 1957: “William Ashton has reopened the Emerson, Brush, Colo. The house, owned by John Roberts, was closed some months ago. Ashton had managed the house, so made arrangements to lease the house.”