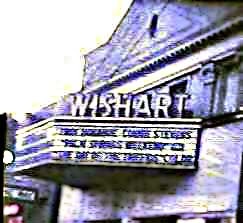 The Wishart Theater was located at the corner of Front Street and Allegheny Avenue on Allegheny Avenue. It opened in 1915. By 1941 it was operated by Warner Bros. Circuit Management Corp. It was my neighborhood theater just right around the corner from where I lived.

I saw so many films there including “West Side Story” and “What A Way To Go” with Shirley Mclaine. It was a wonderful neighborhood theater to go to.

The Wishart Theater was closed in 1967 and was later torn down and replaced with a drive-thru bank. Oh, what a way to go!

I saw “White Christmas” and “The Music Man” at The Wishart. Many more.

Wasn’t there a police station just above Allegheny Ave on Front St?

When I went there as a kid it cost 10 cents and later 15 cents. Even so we would try to sneak in the backdoor on Wishart Street. One kid would go in and then open the door for the rest of us. Didn’t do it too often only when we were broke.

Eich, yes the 33rd district was at Westmoreland and Front Street. I saw the inside of that place a few times, mainly for hanging out on the corner.

I moved to the Front & Allegheny area as an infant in 1937, moved away with my wife and two children in 1963. Grew up on movies at the Wishart. About 1945 one of the Wishhart Theater’s promotions was a give-a-way contest for a Roadmaster bicycle. I was 9 years old. Did not win the Roadmaster, instead won the first prize, a diamond ring. Was looking for a photo of the Wishart Theater, hopefully a wee bit clearer than the one thoughtfully provided by Ginzy. With the information offered by ‘atmos’ and ‘lostmemory’, perhaps there is a photo out there. Thank you.

Went there when i was a kid great memories.

What a great place for a saturday matinees. Absolutely great memories. Anyone remember the manger from the late 50s/early 60s?? I remember him being really nice!