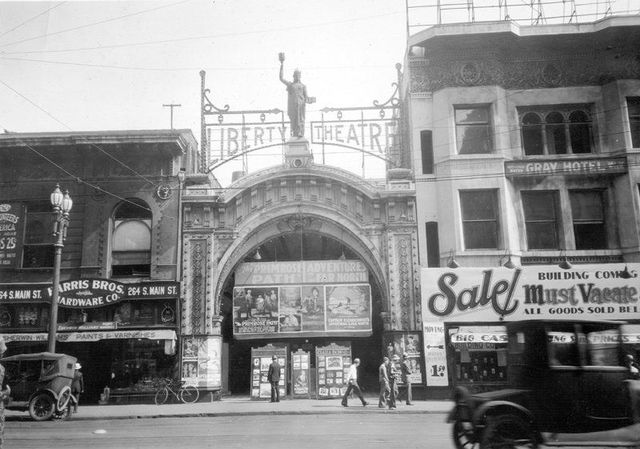 Located in downtown Los Angeles at the intersection of S. Main Street and 3rd Street. The Liberty Theatre was built in 1910 and opened in early-1910. It was still operating in 1926, when the seating capacity was given as 600. It had closed by 1930. It had a very fancy, finely decorated façade which was topped by a female statue (of Liberty?), all removed many years ago.

It is not to be confused with the Liberty Theatre, 136 S. Main Street which had the earlier names of Novelty Theatre and Chinese Theatre and operated into the 1950’s.

Here is a photo of the Play Room, at the northeast corner of Main and 3rd, as it appeared in 1991. The building occupies the location of the Liberty Theatre, and may be either later construction or the same building— minus the front portion which would have to have been demolished when East 3rd Street was connected directly to West 3rd Street, leaving the front sharply angled.

The ornate facade of the Liberty Theatre can be seen in the ninth and tenth photos down on this page of Brent Dickerson’s “A Visit to Old Los Angeles” website.

This theater may have started its life as the Electric Theater, the first theater in Los Angeles or the US built to show movies. The Electric Theater should be at 262 S. Main, though, not 266. An advertisement on the front page of the LA Times, Saturday May 10, 1902 reads:
“ELECTRIC THEATER – 262 SOUTH MAIN, OPPOSITE THIRD ST.
Capture of the Biddle Brothers
NEW YORK CITY IN A BLIZZARD, THE HINDOO FAKIR and many other interesting scenes.
A REFINED Entertainment for
Ladies and Children
LASTING ONE HOUR FOR Ten Cents.
Continuous Performance 7:30 to 10:30 p.m.
T.L. Tally, Mgr.
Phone John 7191”

The Electric Theatre was a couple of doors north of the Liberty, in a much plainer building. It is listed at Cinema Treasures under its later name, Glockner’s Automatic Theatre.

Thanks for the correction. Given the slight difference between 262 and 266, it sounds like it couldn’t have been more than 2 doors away.

Torn down in favor of some new building in the last year or so.

I had thought that what was left of the building on the Liberty Theatre’s lot was to have been demolished as part of the LAPD’s new garage project, which now occupies most of this block, but Google Street View shows the garage completed, and the corner building is still there, too. The building no longer has a Main Street entrance, but a door has been punched in the side wall, with the address 103 E. 3rd Street.

The L.A. County Assessor’s office says that the building was built in 1910, with an effective construction date of 1926. As there’s a record of an organ being installed in the Liberty in 1907, it’s possible that the theater was destroyed within a couple of years of opening. It’s also possible that the assessor’s office is wrong about the original construction date, and that the building on this site now is indeed the remnant of the Liberty Theatre.

The building is currently occupied by a business called US Wholesale Outlet Inc., and the 3rd Street wall of the building sports an array of product logos from Newport Cigarettes, to Kodak, to Tylenol. I don’t know if just anybody can wander in off the street, but somebody in the area could give it a shot. I doubt if any trace of the Liberty’s interior decor remains in this building, assuming that it is the Liberty’s building, but the auditorium space itself would probably still be intact.

Joe, if you look at google street view for 2008 you’ll see that everything except for one free-standing wall was demolished