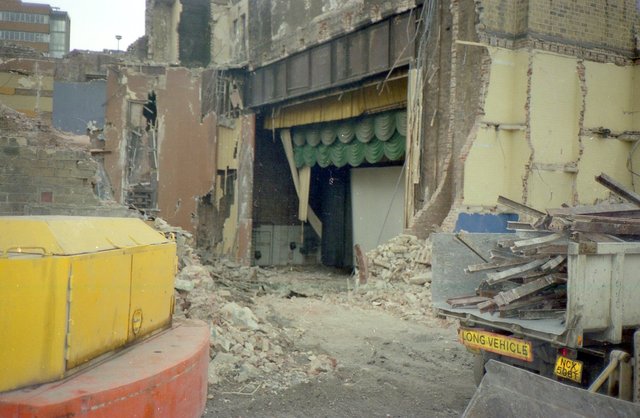 Built on the site of the Cloth Hall, which dated from the 1770’s, the Ritz Cinema was the towns first and only purpose built super cinema, opening on 10th February 1936 with Jessie Mathews in “First A Girl” and Billy Cotton’s Band on stage and with fiim stars Sally Grey and Sydney Howard appearing in person.

It was built for, and initially operated by the Union Cinemas chain. Harold Ramsey opened the Wurlitzer 2Manual/8Rank theatre organ which had an illuminated surround on the console and was the first of this make to be installed in a Union operated cinema and it was the only one to have an illuminated seat. It was originally a 2,036 seat single screen cinema with seating in stalls and circle and there was a cafe/ballrooom attached.

Taken over by Associated British Cinemas(ABC) in October 1937, it was re-named ABC in 1961.

Also used as a live venue, The Beatles played here as part of the 1963 Northern ABC’s Tour, along with The Rolling Stones. Local Amateur Operatic Societies also continued to perform live musicals here, until in February 1974, when the rear stalls area was split into a Painted Wagon pub and a second screen, seating 216. There was now no access into the original front stalls area. The circle became the 648 seat screen 1, using the original proscenium arch and projection box, and the restaurant was converted into screen 3. The ABC was closed on 5th March 1983.

The building was considered for conversion to a live theatre along with the former Palace Theatre, two options much favoured by residents of the town at that time, when Huddersfield was without a live theatre. But as in the case of hundreds of other cinemas in the 1970’s and 1980’s the developers got the upper hand and it was later demolished to be replaced by a supermarket.

Hi, I’m a student at the University of Huddersfield and as part of my course we’re running a radio station for 4 days, which will be broadcasted online. I’m doing a programme about Huddersfield’s music history and I was wondering if you or someone you know who’s still around in Huddersfield, would agree to meet me and give me an interview? Thank you.

My email is .uk if you want to contact me

Many happy memories of the ABC paricularly the saturday morning minors,although it was sometimes impossible to hear anything over the noise made by hundreds of children.My first un accompanied visit was to see Zulu which remains one of my favourite films.

Hi all my mother worked at the ABC as a cleaner and part time usherette when the likes of ET,Jaws were on , we had freerain of the building when she was cleaning , so tons of free sweets and the odd bit of money , even found a flick knife , we saw so many films from ,,,we to many to mention , watched it get knocked down with a f-ing wrecking ball , not right as it had one of the biggest cinema frontages outside of london …. just to say thanks for posting the photos from anthony

Joseph Seal, the famous Resident Organist of the Regal Kingston upon Thames became ABC’s Controller of Live Entertainment and his signature can be seen at the foot of a memo, a scanned image of which I have uploaded to the photos section, from early 1969 relating to a forthcoming live show week at the ABC (Ritz) Huddersfield.

ABC Huddersfield was where The Beatles first performed ‘I Wanna Hold your Hand’ :–

So sad that the beautiful draperies were not rescued during demolition.

I think the house tabs were taken down and refitted elsewhere. They were not that old and were of a very good quality lined satin. I am not sure about the screen tabs as they were older and they may have been left hanging. I had just returned to that Zone (Newcastle Haymarket) prior to closure (Harrogate and Middlesbrough went on the same day).