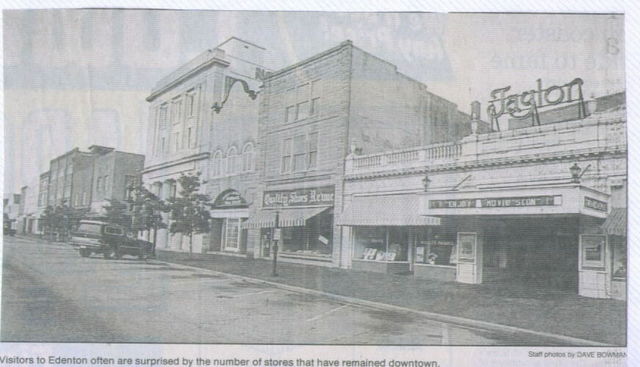 When the Taylor was a single screen theatre.

Thanks for the complements MikeRogers and tlsloews. I forgot to include in the updates that the projectors were adapted to platters for automation from the concession stand before it went twin.
raysson, if you remember Jaws you might remember the red four foot tall “JAWS” letters standing atop the marquee. Spivey, the manager at the time, commissioned me to make them and they were reused at some of the other theaters in the chain. I wonder if they eventually ended up in a dorm room somewhere.

David, check out our ad for “JAWS” Imperial Theatre,Augusta.It was an experience no feature film could match,one would have had to work it like I did as a Usher,Doorman,Popcorn popper,Driving around Town trying to buy Ice cause our old ice maker at the Imperial couldn' keep up,cleaning up vomit etc.And at the same time our sister Theatre,National Hills opened with “BENJI” and for a good three weeks it was kicking butt,all this for $1.25 an hour or so.Had to love it!Plez add more stories!

Just got back to the site and stumbled my way through the changes. Quite a difference. Interesting hooking up with the Google feature. Did a virtual tour of Edenton last week and saw that the comment on this building was that it was built in 1948 and was now an accountant’s office. Well, boo on them this building is the defunct Eden Theater on W. Eden St. not the address listed for the Taylor Twin. There never was a real marquee, just a small unsupported roof attached to the building. Quinn Funiture used the theater for storage for some period of time. The building has been “colonialized” with an antiqued brick facade to match Edenton’s historic character.

I saw movies there as a kid of 6 through 9 yrs old. Great movies like “Angel Face”, “Track of the Cat”, “Superman and the Mole Men” several Jungle Jim and Tarzan features, and a few sci-fi films. I have good vivid memories of this theater and I am thoroughly amazed that I have remembered the movies that screened there 60 years ago.

To get to the Taylor Twin turn right on this picture go to Broad St., turn left, go halfway up the block and turn left to the west for the facade of the Taylor—minus its marquee. The roof mounted Taylor sign spells out the name one letter at the time and does a flash of the complete name. I noticed that every other bulb had been removed indicating that the management really was using extraordinary means to reduce cost of operation.

Was just playing with the Google feature. If one turns left on this picture of the Eden Theater and goes to the west just past the parking lot on the same side of the street and swings back to the right facing north you see the profile of the Eden and the two toned brick structure without any windows is the screen and stage part of the Taylor. The scale certainly confirms the ability to “fly” scenery above the stage for theatrical productions. The Taylor has three roof levels—the facade with the two flanking commercial spaces on each side of the long walk-up (arcade?) to the box office, the lobby and auditorium, and the third level of the stage area. The Eden was strictly a cinema.

Dear David, Mike, Ken and anyone else interested in the Taylor Theatre, The Taylor needs to upgrade it’s equipment from 35mm to digital. Over the next 12 to 18 months the movie production companies are going to all discontinue making 35mm film available and will only be sending out digital film. My husband and I are going to be helping Bob raise the $150,000 he needs in order to purchase the digital projectors. If we are unsuccessful he will have to close the doors. We need all the help we can get so that the Taylor screens do not go dark. If any of you are interested or know of anyone who is in helping us please call me at 252-340-3348. Thanks for your interest in the Taylor Theatre! I can’t imagine our wonderful town not having this movie theatre. I know you feel the same!

jeannecumby, It is a thrill to see the older picture of the Taylor with the marquee intact—did it just rust away? Sorry to hear about the situation it will certainly be a monumental task to raise money in today’s economic situation. Please take the time to post about the changes that were made by the twinning process. I read that the chandelier was removed and sold to a motel indicating construction of a center wall. Was the balcony lost to a wider projection booth? Were changes made to the stage/proscenium—or a wall built in front of the area? Was the ceiling “dropped”? Were the side walls changed? Does Bob own the theater? I saw info on the net that indicated that Mrs. Earnhardt had died but Mr. Earnhardt was still living and 100 yrs old.

The digital equipment is installed (both picture and sound). Long live the Taylor.

A group of citizens got together and purchased the Taylor. It is being repaired and renovated and should open again in late-April/early March! https://www.facebook.com/TaylorTheater/

According to their Facebook page, the Taylor theater reopened on July 6, 2018. https://www.facebook.com/TaylorTheater/