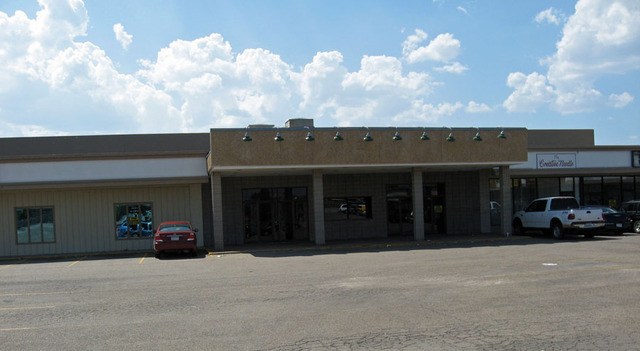 A former ABC and Plitt venue, the Cinema Twin sits in the rear of a strip mall complex, with a freestanding marquee located along Western Street. The theatre has a T shaped layout; a small central lobby and peninsula concession stand in front, two auditoriums positioned at right angles from the back of the lobby (acess via rear sides of auditoriums).

The theatre currently (8/07) stands vacant and stripped of it’s theatre fixtures, including consession stand and wall treatments. While the street side marquee remains intact, the building appears heading for a retail space conversion.

It was a really nice theater when it first opened. I remember going to see the first Star Wars movie there when I was in college in the late 70’s.

I stood in a line of about 300 people waiting to get into the 9:45 PM showing of “STAR WARS” July 1, 1977. The south theater had stereo sound but the north was mono. This ABC Cinema Twin opened March 20, 1975. It was the first theater built in the city with two separate auditoriums. (Western Plaza Cinema and the Fox had their single auditoriums converted to twin with a wall down the center). Opening night I saw “YOUNG FRANKENSTEIN”. ABC Interstate considered this their replacement for the Paramount which they closed earlier that day. Cinema Twin went downhill in the mid ‘80s but perked up for a while with booming attendance for “JURASSIC PARK” in 1993. The theater hung on for only a short time after the coming of the megaplexes, closing in 1998. The last time I tried to see a movie there (a 9:30 PM showing) a kid came to the ticket window and said, “We can’t show the movie 'cause…uh…the bulb went out in the projector and we don’t knew where the new ones are…”. A new operator tried showing Spanish movies for a while in '99 but no one came. It would be a great place for a dinner and movie venue or an “indy” theater. There’s plenty of parking.

I saw some good films there, including THE EMPIRE STRIKES BACK and BACK TO THE FUTURE. Its two screens were good sized, with curtains that would draw back prior to each presentation. As far as I know, the only movie to simultaneously occupy both screens was “2010” during its opening week in December 1984, and I’m sure the management regretted it after the first night’s returns.