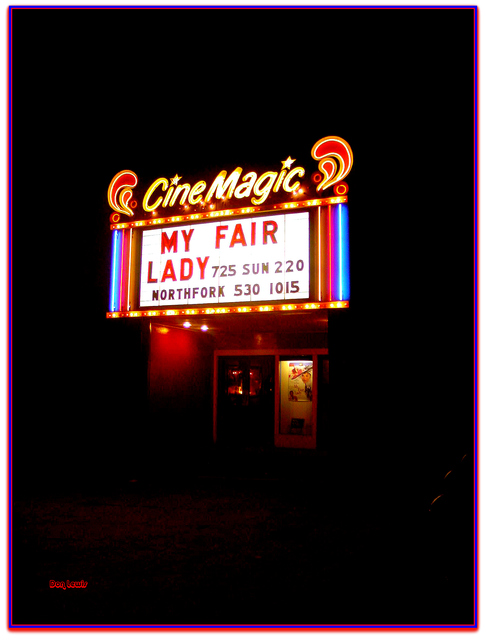 It was renamed Cinemagic Theater in 1991.

“The CineMagic Theater at 2021 SE Hawthorne Boulevard opened in 1914 as the Palm.

It has since had a succession of owners and name changes, including

Along with tasty popcorn, tiny 1950s-style restrooms, and a glittering gold curtain that graces the stage, the 87-year-old theater features a mix of contemporary releases, second-run films, and classics—everything from foreign films to mainstream Hollywood.“
(see View link)

My night-time image of the CineMagic
www.flickr.com/photos/lastpictureshow/256943409

I love Cinemagic, it has a great old theater, amazing old atmosphere, still has the opening and closing of the Curtain before the movie starts and has vanilla coke! Like the old days where they add the vanilla, real cool.

I went to the Cinemagic last night to see Superbad. It does indeed have a small lobby where you buy your tickets and order concessions from behind the same counter. There were two people working, one handling tickets and the other doing concessions. It is far from a completely restored theatre, but you can see touches of its history here and there in the woodwork, smaller bathrooms, exterior and interior doors, and so on. The auditorium is done in blue walls and ceiling colors with blue curtains and a gold curtain that outlines the screen. There are tracks of tiny white lights worked into the walls that run up, across the ceiling, and back down the other wall staggered down length of the auditorium. The seats are not high back, but they are rockers upholstered in a pale orange. All in all this is a theatre with a lot of character. It is worth taking a trip to if you appreciate cinema treasures.

It should be noted that this theater is independent and not associated with the Cinemagic theater chain.

Visited Portland last weekend and stopped in at CineMagic. I was late for the showtime of Lucy but the concession worker let me come in and view the lobby and auditorium — it was cool to stand in the back of the theater while the film screened and take in lovely, old-school vibe. They told me CineMagic is almost 100 years old and has operated continuously under various names. Great place that I will definitely return to next time I’m in Portland.