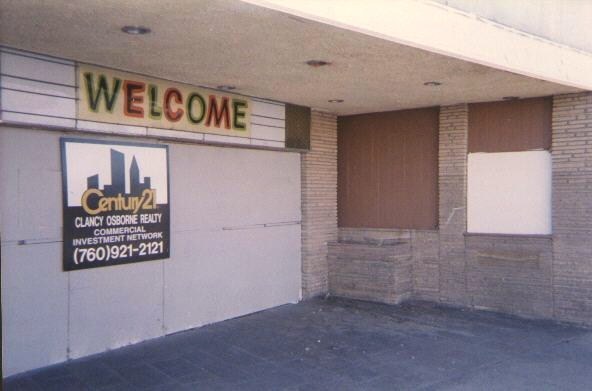 The Hub Theater opened in 1948. By the early-1990’s it was operating as the Blythe Community Cinema. It was demolished around 2005.

Thanks. If you move the photo around a bit you can see that this building had enough space to be a theater:
http://tinyurl.com/opxu4t

The Hub Theatre opened in 1948. The March 6 and March 20 issues of Boxoffice both mention the opening. The March 20 issue says it was owned by Bob Dunnagan, operator of the Rio Theatre, but the March 6 issue has two items, one saying that Dunnigan (Boxoffice uses several different spellings of his name) owned it and the other saying the owner was Dick Simmons. Perhaps they were partners. In any case, issues of Boxoffice a couple of years later give the name of the operator of the Hub as Dave Jarvis.

Google Maps (which gives the correct street name of Hobsonway— Bing mistakenly calls it Hobson Way) shows a theater-like building at that location in its satellite view, but street view shows that the building has been demolished since the satellite photo was taken. Bing Maps has the same satellite view, but no bird’s eye view is available for this location, unfortunately.

Those small buildings on the right of the theater are still visible in the map view, but as Joe noted the theater itself is gone.

I agree, I wasn’t disputing that. I was curious to see if the building was in fact still standing, but it looks like it’s gone.

The Hub Theater was demolished around 2005. It also was known as the Blythe Community Cinema until the early 1990s when it was closed. http://tinyurl.com/ouuo7jv

Yes, I worked there back in the 1980’s. Nobody was ever willing to shoulder the cost of restoring the building to code and so it fell into such disrepair that the city had to declare it a danger. In the 1990s it had no AC so in the summer we had to role a big evap cooler down to the front of the auditorium and carry buckets of ice down between movies to try to keep movie goers cool. The old roof couldn’t support an AC of a size that would keep the place cool. I had done a bit of research at the Blythe Historical museum and found quite a bit of history on the place, including original news paper clippings, cards and cable wired messages of congratulation on the theater opening back in 1949, from Hollywood movie executives and stars of the era. A big celebration was held at Todd Park and included visits from the stars of the movie that was playing and, if I remember correctly, a Marine Corps band.

The seven pictures I shot of this theater back in 1999 are all I have posted here. I wanted to get inside it to photograph the interior, but was never able to do so.

@KenLayton I was doing some research on my Blythe roots and was looking for pics of the Hub…may I use your pics? My name is Lena…I was born in Blythe… I still go from time to time. Thank you for the pics…I am glad you at least have these..it is not for profit…just history sake for Homecoming