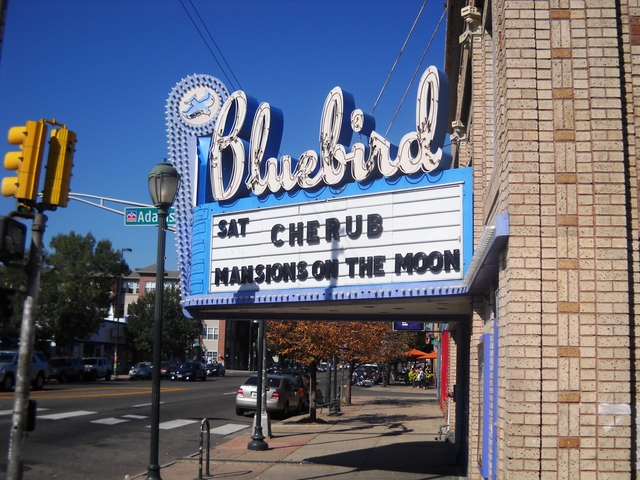 Opened in 1914 as the Thompson Theater. Renovated early-20th century theater with restored frescos and statues.

The Bluebird Theater currently hosts both concerts and film presentations.

It was listed on the National Register of Historic Place on January 31, 1997

The Bluebird Theatre was operated by Fox Intermountain Theatres, Inc.

The Directory of Colorado State Register Properties entry about the Bluebird Theatre says that it was “…the first Denver theater designed specifically for the exhibition of movies.” They give the opening year as 1914.

In addition there were three smaller (450 seat) theaters opened outside the downtown area before the Thompson/Bluebird. The Royal Theater (243 Broadway) was in the Schomberg Theater Building and opend in June 1910. The Rex/Queen Theater (110-112 Broadway) was opened on April 1, 1911 on the site of the present Mayan Theater. The York Theater (2221 East Colfax Avenue) was opened on September 1, 1911.

The Thompson/Bluebird Theater is the oldest theater site still operating as a theater in Denver. However, they have not shown films at the theater for several years and the projectors have been removed. The building that housed the York Theater is still standing, but is a watch repair store. All of the other building have been torn down.

Anyone have shots that are not of the marquee?

Here is an album cover that features the theater:
http://tinyurl.com/dm2r48

Now I see that the pictures in lostmemory’s post already made that clear.