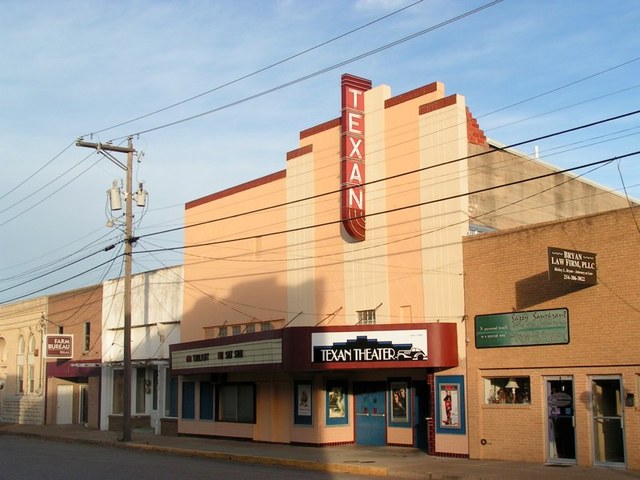 It was rebuilt in 1950, with a seating capacity of 500. The ‘new’ Texan Theatre was designed by architect Jack Corgan. It operated into the 1980’s.

Tonight the Hamilton Texan Theater burnt down. The fire started around 9 p.m. and is still burning @ 12:00. This is truly a sad moment in history and in Hamilton, it is now demolished.

I am from NY, and I hear your cries and that of locals. Willing demolition due to a developer’s greed is bad enough, but it is additionally sad when it happens unexpectedly due to fire. It is truly indeed a sad day. I hope the cause is investigated, and a conclusion is made. When the timing is right, the theater owners should realize the pivotal role the theater played in the community, and in conjunction with elected officials, and community residents, rebuild a historic Art Deco gem; an endangered species countrywide.

The theater does not map out to the address on 110 S. Bell, for reasons unknown. Here is the pre-fire view:
http://tinyurl.com/yj6ts9x

Sorry KenMC that is NOT the prefire view. The prefire view was a resurfaced building that the current owner put a lot of time and money into. She did her research, talked to many a resident (including Bobby Thompson), bought books that referenced the old theater, found the colors that were as close to the original colors as possible, contacted the state historical society, and invested about 20-30k into the restoration of that theater.

There are pictures out there on the web of a beautiful theater with bright blue doors, cream and peach walls with maroon trimmed tiles. The picture that is currently posted was probably taken around the time the Shultz/McCullough’s owned it or maybe even before that when the Pettits had it.

Wow first an explosion,rebuilt and then a fire,thats bad luck.

We built this basic site to remember the TEXAN. Hope you enjoy the images.

texas25th: enjoyed the pics on the site even though it’s a shame the theatre was destroyed.

When my wife and I were in high school, Rita was the popcorn girl. She worked there for the four years that we were in school. I am sadden about the Texan Theater not being there anymore. It was part of my life for all of those years growing up in Hamilton, Texas. Sad, Sad

The Hamilton Record newspaper from 1922 shows the Royal theatre was open but I don’t know the address. Could it have changed names and been the Texan?