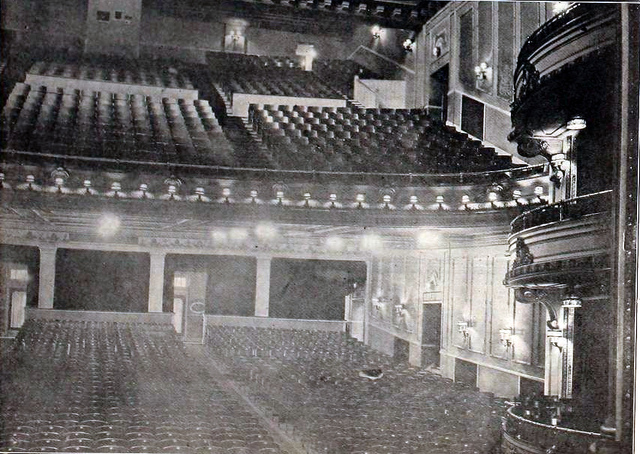 Located at the intersection of 8th Street and Locust Street. The Empress Theatre was opened on September 14, 1913. On March 5, 1921 it was renamed Pantages Theatre, playing movies only. On October 16, 1921 it became the Sherman Theatre presenting vaudeville. On August 27, 1922 in was renamed Orpheum Theatre, presenting Orpheum vaudeville. On August 29, 1931 it became the RKO Orpheum Theatre with Barbara Stanwyck in “The Miracle” showing on the screen plus a stage show. It was remodeled in 1936. RKO closed the theatre on September 26, 1965 with James Stewart in “Shenandoah”.

On October 8, 1965 it was taken over by the Dubinsky Brothers and reopened as the Galaxy Showcase Theatre with Sophia Loren in “The Great Spy Mission”. It was closed on April 24, 1977 with “Squirm” & “Food For the Gods”. It was demolished in August 1977 and the site became a parking lot.

Toward the end of its run, this was also known as the Galaxy Theatre.

According to Mark Heggen’s excellent website “Lost Cinemas Of Greater Des Moines” (http://lostcines.blogspot.com/2006_02_01_archive.html), the Galaxy began as the Empress in 1908, becoming the Pantages in 1921, the Sherman in 1922, the RKO Orpheum in 1933 (not to be confused with the other Orpheum further down the street at 210-8th), and finally as the Galaxy in 1966.

The architects of the Empress Theatre were Proudfoot, Bird and Rawson built in 1913 for B.F. Elbert & J.A. Getchell. The new build theatre cost $150,000 and launched on September 14, 1913. The theatre’s animated neon sign – the first in Des Moines – was said to be a crowd attractor and wowed the locals.

RKO closed out the theatre’s vaudeville days on May 24, 1931 for a refresh and the theatre re-emerged as the RKO Orpheum relaunching with movies on August 29, 1931 with Barbara Stanwyck in “The Miracle.” Stage show entertainment designed to accompany feature films continued into the 1940s. A streamline makeover of the theater’s interior in 1936 wiped away the original charm of the theatre but added air conditioning and revitalized the theatre. The theatre closed on September 26, 1965 with a showing of “Shennandoah.”

Under Dubinky Brothers management in 1965, the theatre became the Galaxy Theatre and the balcony was quickly walled off, the Orpheum sign was removed and the Galaxy signage installed. The theatre relaunched on October 8, 1965 with “The Great Spy Mission.” The theatre closed on April 24, 1977 with a double feature of “Squirm” and “Food of the Gods.” In June of 1977, an ad offered all of the fixtures for a demolition sale after which it was demolished in 1977. Like many theatres, the demolition of the former Empress proved to be a much more time consuming and difficult process as the theatre held tight as the wrecking ball swung. But on August 7, 1977, the theatre could take no more and the crew finished the job in August of 1977. The theatre became home to a parking lot. 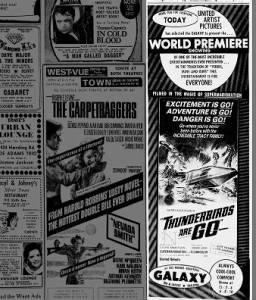