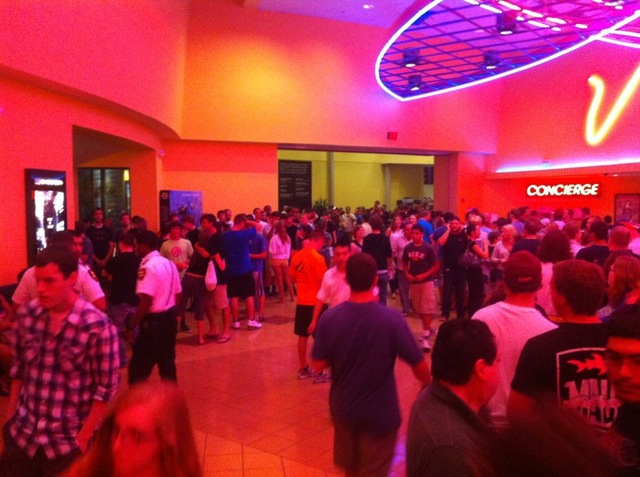 One of two Annapolis multiplexes and probably one of the Washington, DC area’s better run, yet lesser known venues. This venue opened in 1999 along with the new food court at Westfield’s Annapolis Mall.

The venue boasts state of the art digital sound systems (Dolby Digital, DTS, SDDS), digital projection in #10 and #11 and THX certification currently in #1 (the largest and best of the 11), #2 and #9.

Bow Tie renovated this theater in 2018 with recliners, and added a large format BTX auditorium with Dolby Atmos. A full bar and food was also added.

AMC took over this location from Bow Tie Cinemas on 4/18/22.

I saw Star Wars: The Last Jedi in the BTX theater buying tickets online. I’m disappointed they don’t waive the online fee like AMC does. The nice thing about the reserved seating is to choose the best seats as opposed to going early and taking your chances. The seats chosen were in decent shape unlike some other venues with similar recliners.

The $19 per price is hard to swallow given the fact the screen appears to be the same size not even AMC IMAX-lite or Cinemark XD sized. Upon entering we received 3D glasses even though the show was listed as non-3D.

Movie started and then broke down twice at about the same mark when Poe starts his attack on the Star Destroyer. Upon the reboot, the 3D kicked in. Then the movie cut off the frame at the top, which brought laughter to some in the audience. Eventually, the picture got corrected. Sound was excellent, especially the surrounds when Kylo and Rey were doing their force communicating. Nice Visual FX for the most part but the Red Guards of Snoke’s looked too video game-ish. Smoke himself, his head looked like an undercooked oatmeal cookie with the crack on top. John Williams score mixing new and the familiar; Luke and Leia’s theme, especially brought back that nostalgia feeling not heard since Return of the Jedi. On top of that is the resonance of the orchestral score..assumably with the London Symphony..quite epic. :)

Their upscale concession fare is now available. They had people distributing the menu cards. Maybe next time, I’ll give it a try.

I caught Jurassic Park: Fallen Kingdom here, as usual in the very nice BTX auditorium. Being Discount Tuesday, the $7 admission price is excellent. Fortunately, the self service kiosks were running correctly but the seat selection part took a few attempts to take hold. I took advantage of the concession food offering of hot Mozzarella sticks at $6 only because it was the cheapest offering. Why they don’t offer the traditional popcorn/soda/candy items for seat delivery is a mystery.

This time around there was an usher who asked if help was needed to find a seat. Didn’t need it, so it was declined. The plaque at the entrance to the auditorium indicates a 232 seat capacity. This amounts to..I’m guessing 1/3 of what the original capacity probably was with the regular seats in the beginning.

Previews had already started with what appeared to be curtains bunched up on either side of the screen. Not sure if the place now has curtains in use and I forgot to stay after to see if they closed after the movie ended. Will have to arrive much earlier to find out next time.

Movie presentation was excellent as usual. The Atmos trailer is the outer space one that mimics the Star Destroyer sound effect, from the first Star Wars, starting from behind and overhead. Very nice. The movie scene that composes the T Rex head shot and roar brought back memories of the same horrific roar in the original 1994 Jurassic Park at the Hollywood Loews Cineplex in the large DTS/THX auditorium…just loud, crystal digitally clear rumbling sound.

My six piece Mozzerella stick order arrived about 10 minutes into the movie. The guy just laid them at my tray, didn’t say a word. No napkins either. But, they were some of the crispiest, non greasy sticks I’ve ever had. I wonder if they used an air fryer for them. Definitely, will consider ordering them in the future. The other offerings get into the $10 price range, but for $7 all day admission Tuesdays, they look a little more palatable. I wish they had better drink offerings like smoothies and coffee drinks.

Had a great time seeing ‘Aquaman’ in BTX. Dolby Vision trailer is the same. Great sound and visual effects. For the $10 bargain Tues price, it is a bargain. Better than paying $18 for IMAX-lite and you still get Atmos. I have to admit, the still pics of Aquaman didn’t do much for me having grown up with the cartoons. Of course, this is probably the way with pretty much all of the Marvel and DC Comic movie adaptations. Wasn’t until Donner’s Superman, that that mold was broken.

Ordered a $13 pizza thinking it was a huge..Costco-like big slice, but it was enough for 2 or 3! Its more of a flat bread pizza like CA Pizza Kitchen. I wish they had a drink order option at the kiosk, they don’t. Delivery service is friendly, but they don’t think to give you napkins. Should have worn long sleeves tonight.. :)

Is there a bow-tie there anywhere?

BTX is Bow Tie cinemas branding of a large screen premium presentation experience. 4K, Dolby everything..Atmos. Other than the admission increase, its not much more than what they had when it was just THX and Digital. To cinephiles that may sound blasphemous, but I have had great movie EXPERIENCES here prior to Atmos and the Vision installs. The faux leather recliners are welcome but it gives reason to jack up admission prices such as the IMAX-type places like AMC. Bow Tie is a north east chain.

I saw Toy Story 4 in the BTX theater with Atmos. I loved the rear voice track of the characters just as the picture opens. Excellent aural experience but I was not quite ‘feeling’ it at the much talked about ending. They have alcohol now but I opted for the mozzarella bites and cheese sandwich since they were rather cheap. Too much cheese in one sitting but served hot. The service could be better if the server would remember to bring napkins. I’m sure as long as this film makes the $, we’ll see another one as long as the story is compelling. They could reboot the thing with new kids.

I saw Spiderman: Homecoming in BTX here today. Great sound and presentation. The preview for the next Furious movie and Terminator played surprisingly low. I’m glad I waited a week to pay only $10 today vs $19 last holiday weekend when the movie opened. Had a sense of deja vu with the films VFX. The water creature looked like the water version of the Sandman from the Tobey McGuire era Spidey films. The Spidey flybys could use more visual flair with first person-type fx.

Caught Terminator: Dark Fate in the BTX Atmos Theater last week. Great surrounds in the beginning and throughout. Why can’t they BTX all their auditoriums? Even if some are smaller. The $10 Tuesday rate is great. The CGI de-aging of Sarah Connor and John is the best I’ve seen, much better than Princess Leia in Rogue One. The automated kiosks reduces the need for live cashiers, which is okay but the inattentive Attendant should go. Took what felt like an eternity to recognize me and split my ticket to admit me. They should automate his job, too.

Now an AMC. I have this bad feeling things will go down here.