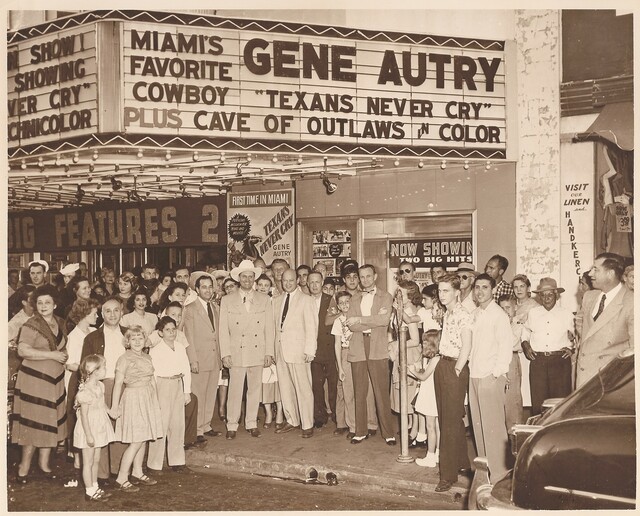 The Skydome Theatre was opened in 1925 as an open air theatre for African-American patrons. Around 1933 it was made into a hard top theatre and was operated by Wometco Theatres when it was renamed Harlem Theatre. The Harlem Theater is listed in editions of Film Daily Yearbook from 1934-1955 as a Negro theatre for African American audiences. It was remodeled and reopened as the Capitol Theatre on September 6, 1953 with Tony Curtis in “Houdini”. It was closed on January 28, 1975 with Savage Streets" & Chung Wang in “Street Gangs of Hong Kong” (aka The Delinquent).

This theater was renamed the Capitol in the 1950’s, originally the name of the downtown Miami theater that became the studios for WTVJ (then Channel 4). The Harlem/Capitol was torn down in the late 1960’s for construction of the 836 Expressway.

Was that Regal Brewery the one next to Booker T. Washington High (later Junior) High? If so, I remember it well when I went to school there during the first year of integration. A sour smell fill the air all day long at the school.

The Regal Brewery was on the Miami River near [i think] 20th Street. They made both the Regal and National brands.

1973 Miami News article on closing of the Capitol

On September 6, 1953, the Harlem Theatre became the streamline moderne Capitol Theatre for Wometco Theatres with Tony Curtis in “Houdini.” It was likely at the renewal of the theater’s 20-year lease which would place its possible opening by Wometco in 1933.

In a moment highlighting the Miami police’s decade’s long hostile track record on race relations, the police shuttered the Harlem Theater’s March 17, 1934 just prior to an integrated audience show exclusively with African American performers. Over 2,000 patrons showed up for that evening’s show and so did Miami police who said they would arrest all of the African American cast members if they presented the show with any White patrons in the audience. Wometco was outraged by the late notice cancellation and said that the Lyric Theatre had a similar show without incident in 1932 (that ad is posted under the Lyric’s Cinema Treasure page). But the circuit couldn’t find a judge to intervene at the 11th hour and the show was cancelled with refunds given.

The show was then rescheduled on March 21 and 22, 1934 with Wometco both gaining an injunction and vowing to donate proceeds to the Salvation Army. But that wasn’t enough for the City Council which threatened to pass an ordinance prohibiting any White person from attending an African American theater. Wometco buckled cancelling the March 21st show and then offering the show exclusively to African American patrons on the 22d. Mayor E.G. Sewell was pleased with Wometco’s decision saying that “you are bound to have trouble” in such a performance.

The City then proposed an ordinance prohibiting performances by African American displaying any part of their bodies other than face, neck hands or arms before White audiences and by White performers using the same language in the presence of African American audiences. That ordinance was not enacted. But the City would get the last word in plowing a highway project right down the center of the neighborhood where the Harlem / Capitol was a focal point thus dissecting the formerly-vibrant African American neighborhood out of existence.

Sad Miami History, Dallasmovietheatres. I remember Jimmy Barnett, manager of the Olympia in the 50’s and 60’s, telling me that white Cuban stage dancers from Havana were forced to wear white make-up because the City of Miami thought they were a little “too dark” to perform there otherwise.

Closed on December 13, 1973 with a double-feature of “The Black Six” with Mike Angel and Rod Dana in “Kill or Be Killed.” The wrecking ball struck days later.

Dallas, you may want to double check that. The Miami Herald Movie Time Clock carries a Capitol listing until 1975. Did it continue to run as an independent?

You are correct. The closure and story about the theater’s impending demise were printed but there was an eleventh hour appeal made of the demolition’s starting point when there weren’t enough homes provided for displaced elderly residents. The theatre did reopen before Big Chief Demolition came back in and wiped out “Good Bread Alley” finally taking the Capitol Theatre and everything around it early in 1975.

Locals called the urban renewal plan simply a means by which the local government would allow the displacement and destruction of African American neighbors and neighborhoods. Final showtimes for the Capitol are corrected as occurring January 28, 1975 with a double feature of “Savage Streets” and “Street Gangs of Hong Kong.”

The venue opened as the Skydome Theater, an open-air destination for African American fans of films, live entertainment and boxing in 1925. Wometco took on the venue making it a hardtop called the Harlem Theatre likely in 1933. Wometco closed the Capitol Theatre in downtown and moved the marquee to the Harlem which was renamed the Capitol for its September 6, 1953 relaunch.