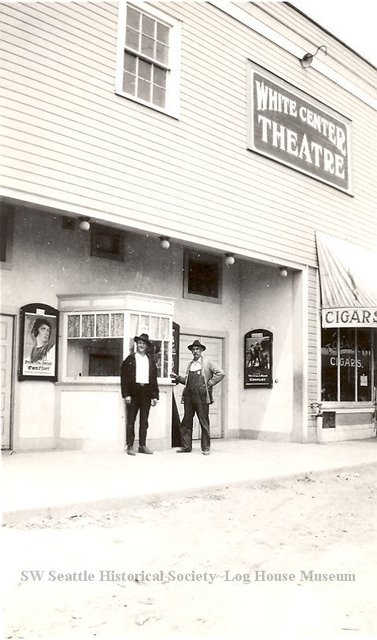 The White Center Theatre, owned and managed by George Srigley, opened in 1916 on the southwest corner of 16th Avenue & Roxbury Street, across the street from the Seattle city line. A new owner changed its name to Coy’s Center Theatre in 1937 and relocated it around the corner to Roxbury Street in 1942. The theatre closed in 1955, at which time it was gutted and incorporated into Olberg’s corner drug store.

The White Center was a boyhood haunt of poet Richard Hugo (1923-1982). It inspired ‘The White Line’ his near-classic essay about going to movies. Two paragraphs of the essay, which is in print as a chapter of Hugo’s ‘The Real West Marginal Way’ appear below:

‘George Shrigley’s [sic] theatre had one restroom. It was just to the right of the screen, a small cubicle with a single toilet bowl. When you opened the door, the light inside fell across your face letting the audience know who was going where. One night a woman used the john, the only time I ever remember it happening, and though I was just a boy or perhaps because of it, I imagined how embarrassed she felt as the light revealed her to the crowd’.

‘George Shrigley had a white line painted across the single aisle. Children had to sit below the line so they wouldn’t disturb the grownups watching the movie. Since we were noisy, and since we sat between the adults and the screen, Shrigley kept the volume high so the dialogue and music could climb over our screams and laughter and reach the rear of the house. Once in a while one of us would try to move above the white line, but the usherette kept close tabs on us and would hustle whoever it was back below the mark’.

However….The Center Theatre is listed in the 1941 and 1943 editions of Film Daily Yearbook as a theatre located at 16th Street NW, Seattle. In the 1950 edition of F.D.Y. Coys Center Theatre is still listed as being in Seattle (well in the above description is states it was just across the city line) at 1615 West Roxbury Street.

Theater owner shoots burglar in head, was former theater employee. From Boxoffice in May 1948.
http://tinyurl.com/ny95js

I figured out how to post the correct page without it automatically jumping to page one. If anyone has trouble seeing the page in question, let me know.

I will most likely stick with typing in the articles myself. I can see how this would be a problem for some systems.