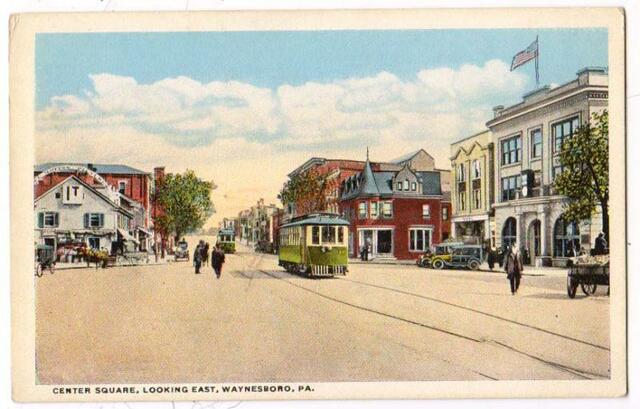 An article in the March 15, 1965, issue of the Hagerstown, Maryland, Daily Mail said that the Strand Theatre Building in Waynesboro had been gutted by a fire. The building, it said, was nearly 100 years old, and had not been used as a theater since the 1940s.

The Strand Theatre was in operation by 1924, when the Cumberland Valley Volunteer Firefighters Association held its 23rd annual meeting there.

A small photo on page 183 of Waynesboro as We Knew it, by Todd Andrew Dorsett, (Google Books preview) shows Main Street east from Center Square in 1939. The Strand was in the building at the northeast corner of the square. The lower floor is obscured by a bus in the photo, but the theater’s vertical sign can be seen (though not easily read.)

Another page of Dorsett’s book (I hope this link goes right to it) has a ca.1918 postcard view east across Center Square, and the site of the Strand is occupied by an earlier theater called the “It” (the name usually appears in quotes in old publications.) The “It” Theatre first appears by name in the trade publications in 1910, but this item from the May 22, 1909, issue of The Moving Picture World is probably about it:

“Waynesboro, Pa.—Cashier W. H. Gelbach, of the Citizens Bank, has contracted with A. R. Warner for the building of a new moving picture theater on Center Square.”

In the 1918 postcard the “It” Theatre occupies a building with a gabled end facing the square rather than the two-story flat-roofed structure which had the Strand’s entrance, but if the report of the fire in the 1965 Daily Mail article is correct, and the Strand’s building was then almost 100 years old, it must have been the same building.

The last mention I’ve found in the trade magazines of the “It” Theatre is this item from The Moving Picture World of April 6, 1918:

“Waynesboro, Pa. — The ‘It’ theater, in this city, for some time owned by John Karper, has changed hands, having been purchased by Watson & Daley of Hagerstown, Md. The management of the ‘It’ was assumed by Watson & Daley on March 16. After extensive repairs and improvements they will add a program of vaudeville to the moving pictures.”I’ve tried to find a connection between Watson and Daley and the Strand Theatre, but failed. In fact the only mention of the Strand I’ve found is a brief mention in The Film Daily in 1943. Still I think it very likely that the Strand was the “It” Theatre remodeled and renamed.

My links in the previous comment are not going directly to the pages. The ca.1918 postcard with the “It” Theatre is at result 5 of the 8, and the 1939 photo of the Strand is at result 7.

Joe, I uploaded a postcard image of, I believe, the gabled building to which you refer. It is, however, on the site of the subsequent Star Theatre, recently added to Cinema Treasures. None of the images to which you refer in your April 8, 2014 post are accessible. Would you please upload them on this site.

robboehm: I didn’t have copies of those pictures, and have only found one of them (the one from around 1918) on the Internet. It’s the one that shows the gabled building with the It Theatre sign on it. It isn’t the building in the photo you uploaded, which was the Star Theatre, but was across Main Street from it. I think maybe the It wasn’t in that gabled building with the sign, but the one beyond it, which I believe is the building identified as the former Strand in this photo at CinemaTour.