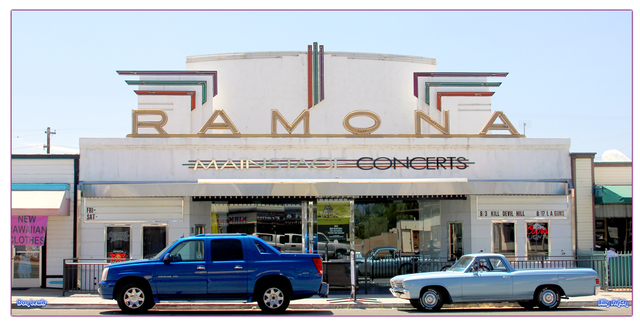 Opened in 1937, the Ramona Theatre was twinned just before 1976, after being closed for seven years, when its last owner, Gary Cook, took over its operation.

It remained a popular place until it closed in February 2002.

The 400-seat theater had been for sale for $426,000 and was finally bought in 2002 by Cheryl Day and her husband. Their new Ramona Mainstage Theater opened in March 2003. By early-2007, the building was closed and ‘For Sale’. It has since reopened.

Hello, My husband and I purchased the Ramona Twin Cinemas this year and are in the middle of remodeling the now “Ramona Mainstage Theatre” The theatre will reopen in March of 2003.

I have photos of the theatres original grand opening in March of 1947. If you are interested in more information on the theatre, please contact me.

Do you have the current movies posted anywhere?
Linda

Here is an updated link for the current occupant:
http://www.ramonamainstage.com/

From 2013 a photo of the Ramona Theatre in Ramona California.

Why the seating capacity was so variable is as much a mystery as why it had a grand opening in 1947. Perhaps it was reopening after a major renovation that year, or a rebuilding after a fire, or after being taken over by new owners. I think the current theater is the one from 1937, though. Had it been built new as late as 1947 it would most likely have been a freestanding building with its own parking lot. Parking was not yet crucial in the 1930s, but it certainly was in the post-war period, especially in California.

Ramona Mainstage has a web site The “About” page has a photo of the 1947 event, though it is small and doesn’t show much detail. There’s definitely a post-war car parked in front of the theater though (a 1946 or 47 Chevrolet Aero sedan, if I’m not mistaken.)