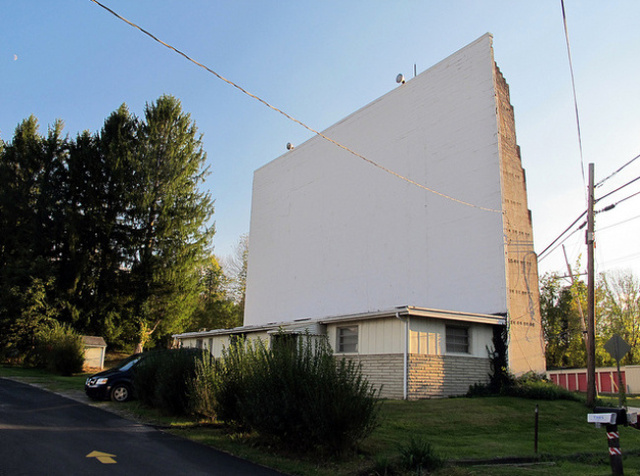 The Sunset Drive-In was opened in 1947. It was operated by the Ellis brothers & Joe Feeney. It is the last open drive-in located in the Clarksburg area, located on Highway 19 a few miles south of Shinnston, and north of Clarksburg. It is a beauty! It is located adjacent to the Ellis Restaurant and has been owned by the Ellis family since 1955.

It has a huge screen with a home built into the screen tower. The drive-in is open seasonally, and the restaurant is open year-round. An interesting feature is that the drive-in sign is located on the other side of the highway from the drive-in. The Sunset Drive-In is located in a beautiful scenic location in the West Virginia mountains, and is well worth the visit if you are in the area.

A more interesting photo of the screen tower:
View link

The drive-in is located here — not far from Jewel City Blvd.

The Sunset Drive-In has made the conversion to digital projection.

Also, the photo in the picture above is the Sunset Drive Inn.

The West Virginia Historic Theatre Trail wrote, “The Sunset Drive-in Theater opened in 1947 … making it the oldest operational drive-in theater in West Virginia. It has been owned by the Ellis family since 1955, along with the adjacent Sunset Ellis Restaurant, which shares its roadside marquee. (Prior to that time, the Ellises had owned another combination drive-in theater and restaurant operation, the Ellis Drive-in, in nearby Bridgeport; it no longer exists.)

When I clicked on Kenmore’s map link today, Google said the address is 2643 Horners Run Rd, Shinnston, WV 26431. Wikipedia says that Meadowbrook is an unincorporated area, yet that’s where my reference books site it 70 years ago. Confusing!

In 2012, The Exponent Telegram wrote, “During the past 65 years, (then-manager John) Ellis only knows of one season the Sunset Drive-In wasn’t open.

“Ellis and his wife Norma have been running the Sunset for the past 12 years, helping his older brother Anthony Ellis, who owns both the drive-in and the neighboring Sunset Ellis Restaurant.

“For the 25 years prior to that, Ellis’ brother leased the Sunset Drive-In to Jim Henderson, owner of the Grafton Drive-In, before Ellis and his wife took over.”

That explains the Henderson listing, but now I’m stuck wondering what year the Sunset was closed.