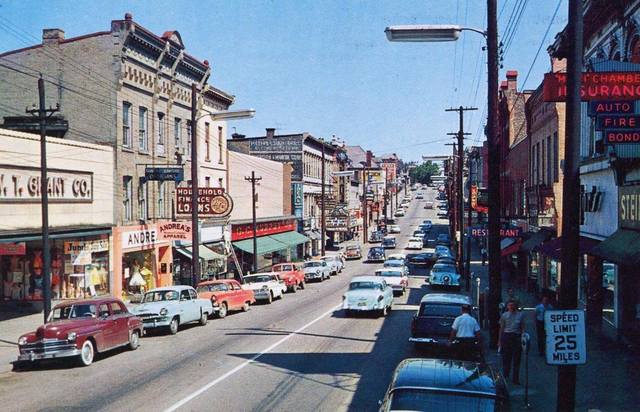 The State Theatre opened January 15, 1933. The Eberson Archives in Florida have an album of 24 photos. By the early-1940’s it was operated by Warner Bros. Circuit Management Corp. It was later operated by the Associated Theatres chain. The State Theatre closed in May 1960. The front of the building survives in retail use, but the auditorium is now a parking lot.

The building that the State’s entrance was in, at least, was still standing when Google’s street view truck went by. At that time, 63 N. Main Street was occupied by a comic book store called The Gaming Dungeon, and that store is still listed on multiple web sites, and has a Facebook page active as recently as last April. It was also the location of a CCG event scheduled for September 24 this year.

From Google’s satellite view, the building looks a bit small to have held an auditorium seating over 1,300. There’s a big parking lot behind it that could have been the site of a big auditorium, but it was a parking lot as long ago as 1969, according to an aerial view at Historic Aerials, so if the theater was still operating in the 1970s, as sgtjim says above, then it must have been in the building that shows up in the Google street and satellite views.

The Washington Theatre, which was across Main Street from the State, has definitely been demolished, though. Maybe that’s the theater spectrum was thinking of.

Comments on this theater from before August 2, 2007, seem to have gone missing. I think that this 1949 photo must have been the one Chuck linked to.

Here is a link to an old postcard that shows both the State and Washington Theaters on Main St in Washington, Pa. http://cinematreasures.org/theaters/35143/photos/28272 I worked at both of these theaters in the mid 50’s as they were operated by the same management team of Bill Cardone and Gina who was a tall striking brunette. The Washington Theater was renamed the Penn before it closed in 1973. I hung the metal alphabet on both marquees. I would draw a scale and measure out how much space each letter would tale on the marquee. The letters hung from metal lines.

RSM3853’s list of movies shown at the State and Penn Theatres indicates that the State closed at the end of May, 1960, and the Penn opened in March, 1961. The operators must have decided to close the larger State Theatre and renovate and rename the smaller Washington Theatre to be their first-run house. With the decline in theater attendance that took place in the 1950s and 1960s, that would have made economic sense.

I just noticed that, in my second comment of June 7, I wrote Chestnut Street when I meant to write Main Street.

The September 27, 1932, issue of The Film Daily said that the projected opening date of the John Eberson-designed theater being built for Warner Bros. at Washington, Pennsylvania, was January 15.

Circa 1956 photo added courtesy of the AmeriCar The Beautiful Facebook page. Not the best quality, but the building and marquee is visible on the left.

This item from the November 22, 1924, issue of Moving Picture World reveals that there was an house in Washington called the State Theatre nearly a decade before 1933:

“Arthur Gottesman, who purchased the old Capitol at Washington, reopened the house on November 10 and has renamed it the State. This house also has been considerably improved and is one of the finest picture palaces in the local territory.”

An advertisement for Washington’s two newspapers, the morning Observer and the evening reporter ran in the January 28, 1922, issue of Editor & Publisher, and included a paragraph boasting of new construction projects then underway in Washington, including “…the Capitol Theatre, one of the largest in western Pennsylvania outside of Pittsburgh, costing a quarter of a million dollars….” So the Capitol must have been a large house, and not really so old when Gottesman took over in 1924.

I’m not sure what to make of this information. Was this the same State Theatre, or a different one. If different, did it later operate under a different name? If the same, why did it have to be rebuilt in 1933? Was there a fire or other disaster, or was it just extensively remodeled?

This is complicated by a comment on this page by aprivee on November 20, 2008, which includes the line “[t]here seem to be two different theaters built by Eberson at different times under the name State Theater in Washington, PA.” Did Eberson design the Capitol, or perhaps merely design the remodeling of the Capitol into the State for Arthur Gottesman in 1924? There is clearly a gap in our knowledge of Washington’s theater history.