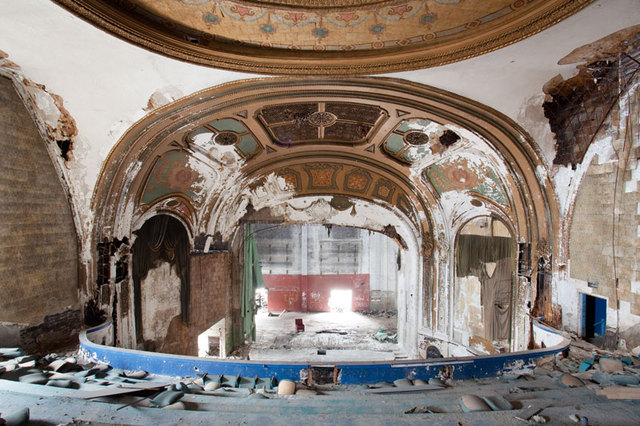 The Eastown Theatre was one of Detroit’s great neighborhood theatres, located to the northeast of the city near Hamtramck. It opened originally October 1, 1931 for the Wisper-Wetsman Theaters circuit. It was mainly a movie house, though it did have a small stage and did occasionally host stage shows as well in its early years.

Its decor was a mixture of Renaissance Revival styles, including Spanish and Italian with Baroque and Neo-Classic elements as well. The auditorium, which included a large balcony, originally sat just under 2,500. It was designed by the firm of V.J. Waier & Co.

Though the Eastown Theatre closed as a movie house during the mid-1960’s, its second life was just beginning, for which it would be much better known, as one of Detroit’s premiere rock venues.

Beginning in 1969, the list of performers on the Eastown Theatre’s stage reads like a who’s-who of rock and roll of that era. Alice Cooper, the Doors, Pink Floyd, Jefferson Airplane, Bob Seger, Jethro Tull and the Grateful Dead are just a few of the bands who played here between 1969 and 1973.

It was forced to shut down in 1973 by the city of Detroit, cited for failing to meet health and safety codes. In 1975, it reopened as a jazz venue, which remained in operation for about a year. After this, it was used for a short time for performing arts and live theatre, but again closed down.

During the mid-1990’s, the Eastown Theatre hosted raves, and later housed a church. Today, the building is unused, and by January 2015 the roof collapsed due to illegal scrappers stealing sections of the building. It was demolished in November 2015.

Direct link to the above.

I recently photographed the Eastown. Check out the images here.

This copy & paste link has a list of the Eastown concerts by year and month.

So much for that:

But then, realistically it was probably done for years ago.

Apparently it was due to illegal scrappers.