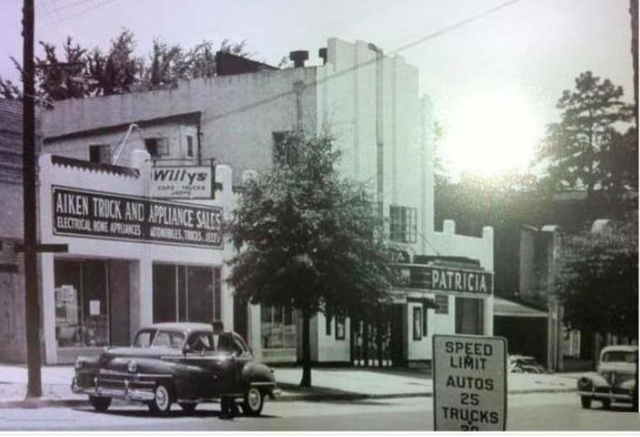 By 2018 the building is in office space use by ReMax real estate.

Lassiez-Faire is at 120 Laurens Street NW.

I sent a nice picture down to Nick in Tampa on this theatre.hope he is able to put it on.I have sent alot of theatres,so i am sure he is backed up.

Here’s a 1948 photo of 3 girls standing on the sidewalk with the Patricia Theatre marquee in the background:
View link

Yeah,Tis,Our Friend Bill Barkley found this in the local paper and Mailed it to Nick,to work his Magic.

The Patricia was most likely the proposed theater that was the subject of this brief item inThe Film Daily of October 30, 1937:

“Aiken, S. C. — Working drawings have been started on a one-story motion picture theater building here for H. B. Ram. It will have brick walls and a carrara glass front.”Herbert Ram also operated the State Theatre in Aiken.

But does anyone have an exact opening and/or closing date for Patricia? Also, who was the architect and in what style was she designed?

This opened on October 7th, 1938, and the 2nd screen, the Patrica Annex on February 25th, 1940. This theatre should be listed with two screens. Grand opening ads posted.

The early 1940 opening for the Patricia Annex is very interesting. Jimmy Edwards always claimed that his Alhambra & Annex Theatre in Alhambra, California was the first twin cinema in the United States, but I don’t think his Annex opened until later in 1940. It looks like the Patricia might have beaten Edwards to the punch, though neither of them would have actually been the first twin cinema in the U.S., as at least a few twin storefront nickelodeons had operated in the early 20th century, and the Duplex Theatre in Detroit opened as a new-build twin in 1915.