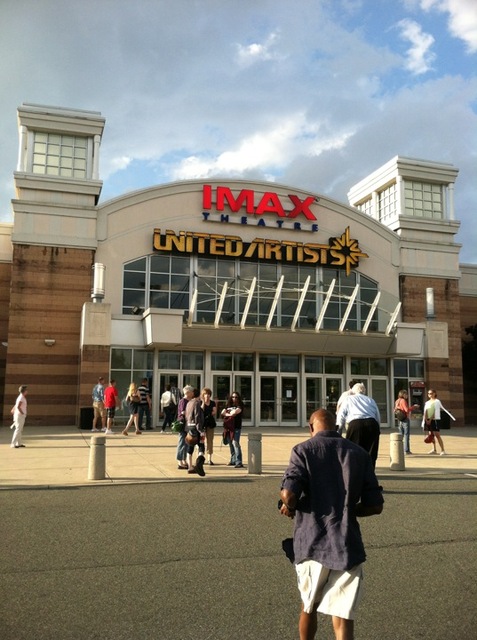 This 17 screen (including IMAX) theatre now operated by Regal but still advertised as United Artists is a short distance uphill from the King of Prussia Mall in Montgomery Country and northwest of Philadelphia. It is not directly part of the mall. Opened April 21, 2000, the United Artists King of Prussia 16 was constructed with all auditoriums having surround sound and stadium seating. Auditorium 9 is the IMAX, which closed in 2001, but later reopened and usually shows mainstream blockbusters. Auditoriums 5 & 12 opened as the largest regular auditoriums with 488-seats in each. Auditorium 12 by 2013 had been refurbished to be the RPX (Regal Premium Experience) with a huge curved 60ft wide screen. Auditorium 7 is the next largest with 305-seats. Auditorium 10 is the next largest and had 260-seats, but was redone in 2019 as a 4D auditorium.

This theatre replaced other theatres operated by United Artists, including the Plaza Theatre which had been twinned, at the King of Prussia Mall, and the nearby Queen Theatre.

Yeah. I am not sure why Regal would do one thing in one place and not be uniformed.

Only been in the IMAX for Dunkirk and it was a very good experience. Can’t comment on the masking issue. The last time I was at UA Oxford Valley and UA Grant Plaza (within the last 3-6 months) they were still using the masking at both complexes. In fact, prior to the 2.39 to 1 films begin they pulled back the side masking. Kind of reminded me of when there were curtains. I always loved the effect of the side masking being retracted…it was a nice effect. The current trend of no masking IMO, is just a tacky cost saving measure. I wish some film makers and studios would take a stand with the theater chains. It just cheapens the whole experience. If I want the black bars I can stay home and watch my 55" Sony.

I feel the same way Cinedelphia especially since the Regal here will only use the masking in the 4 large theaters that have the side to side masking. The others have vertical masking and they won’t use it.

This really reminds me of 1982 when Spielberg would not allow any theater that was showing ET in 70MM to use the masking even though he masked the film and it was like 70MM but 1.85

Auditorium 10, one of the largest auditoriums as my Intro says, was closed off yesterday “hard hat only” I am not sure, but I think they may be converting it to 4 D (which I have no interest in). I was there to see the spectacular WW1 docu “They Shall Not Grow Old”

@HowardBHaas Could be either 4DX or ScreenX going into that one particular auditorium.

The 4DX screen opened at King of Prussia with the opening of Avengers: Endgame

The 4DX auditorium has signs posted mentioning Lightening, Snow, Fog, Wind, Motion, and more! 2 different signs on each side of the auditorium entry, each side stating different effects.

I just read that the IMAX is getting 4K Dual Laser Projection. I would assume there are some other renovations going on as well. When I was in London a few years back, the projectionist at the BFI IMAX told me they couldn’t get Laser Projection because IMAX would not put in 4K Laser in theaters which still had 70mm IMAX.I wonder if that policy has changed or if KOP is loosing 70mm…that would be a shame.

IMAX Laser GT projection is intended to replace IMAX 70mm projection, and this has been the case for most venues. But not all–the IMAX in London’s Science Museum (recently refurbished) is one that retained 15/70 projection. (Not that there’s much point…!)

The BFI London IMAX is an oddity, given it’s very much an iconic venue. However, a scheme to redevelop the site it’s on and surroundings is in the planning stages. BFI have signed confidentiality agreements with respect to this. Whilst a replacement IMAX, one might imagine, would be likely (à la Darling Harbour IMAX, Sydney,) it’s hard not to draw conclusions on why responses such as the one offered to yourself are given to queries about IMAX Laser GT not being installed.