Friends of the Tybee Theater 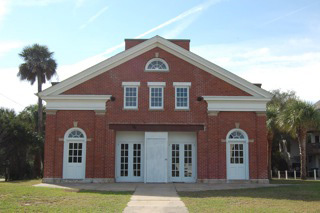 The Post Theater was constructed within Fort Screven, on Tybee Island, Georgia, by the United States Army in 1930. The state-of-the-art theater was one of the first in Georgia to have sound features. Because the theater was built as part of the army base, the blueprints for the theater were one of several standardized designs.

The building was designed to be simple and functional, so it does not have the detail characteristics of many high-style buildings. The theater however, does have the forward facing pediment characteristic of the Greek Revival Style. The interior was Art Moderne. When Fort Screven was decommissioned in 1945, the Post Theater was sold with other military properties and became the Beach Theater.

From the late Forties to the early Sixties, citizens and visitors on Tybee Island enjoyed movies and lifetime memories in the theater. After a few years, the theater was closed, and for a brief time it served as a sail loft. Prior to the purchase of the theater it has stood vacant and open to the elements for over 20 years.

In 2006 the theater was purchased by the Friends of the Tybee Theater. Phase 1 of restoration is complete and a capital campaign completed the renovation by 2016.

According to their website-should be changed to OPEN. This old classic came so close to being demolished,after escaping “condo conversion”,believe it or not.

Was just here two weeks ago to see an Elvis impersonator. The theater looks wonderful- great sound, great renovations. The good people of Tybee are putting this theater to use for both live performances and films. Yay!

Too bad the theater on the area of Ft.Moutrie,Sullivan’s Is.,SC,could not get same treatment.