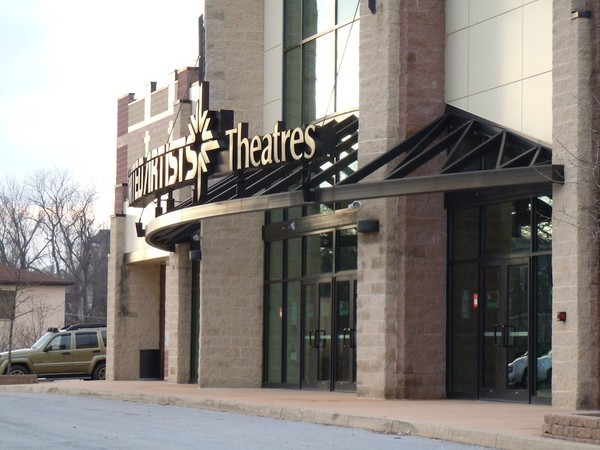 The United Artists East Whiteland Stadium 9 was in the Chester County suburb of Frazier, west of Philadelphia, on Route 30, one half mile east of Route 202. The theatre had over 500 parking spaces.

The theater opened September 24, 1999. The exterior featured neo-Art Moderne styling. Each auditorium was stadium seated and had digital sound and wall to wall curved screens. JKRoller Architects of Philadelphia, PA designed the 40,000 square feet UA Whiteland theatre which was taken over by Regal when the chain absorbed UA theater.

On Sunday April 21, 2013, the theatre closed. Devon Automotive Group plans to open a Sloane Toyota automobile dealership in the end of 2013 on the site. Nearby, in Malvern’s Uptown Worthington area, a Muvico megaplex had been planned, but the deal collapsed in 2011.

This theater’s days may be numbered. The area’s zoning board has approved a zoning change that would allow an automobile dealership to operate at this location and a new multiplex is scheduled to oper not far away. View article

Officially closed as of April 2013. I am so sad they closed this theater—this place was my stomping ground from 2000-2003 when I was a student at West Chester University. We used to load up as many people as we could into a car and drive down 202 to Frazer and use our Student IDs to get $7.50 tickets, super cheap in the days of movie ticket prices starting to hit double digits. The best part was this theater was so new and relatively remote that it was almost never crowded and never had lines.

This was the also the first theater in the area that had the high backed rocking theater seats and flip-up arm rests.

I remember beta testing the Regal Rewards program when they first launched it, I had something like 1,000 regal credits before my card broke in half. Such a shame, this was a nicest building in that whole stretch of Rt 30 which is pretty dilapidated at this point with the exception of a super Wawa and a few other businesses.

The last movie I saw here was Django Unchained around Jan/Feb 2013. I will miss this place!

I worked here from the day it opened in 1999 to the day it closed last April. It was the greatest theater I have ever known! I have a ton a pictures that I can upload too.

Its really kind of sad to see a nine screen theatre last only 14 years. There’s something really wrong with the movie industry when theatres only last 14 years or so.