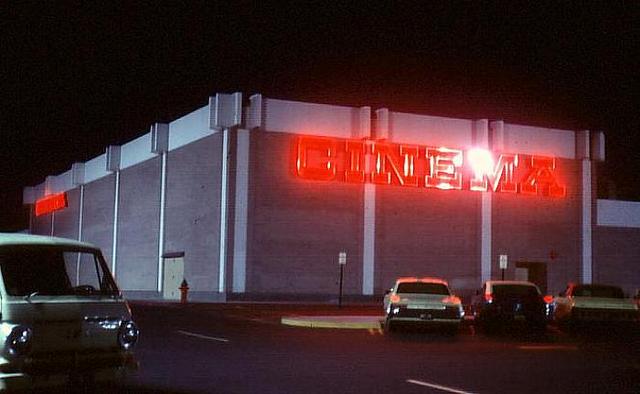 The Western Plaza Cinema was opened by General Cinemas on March 26, 1968 as part of the Western Plaza indoor mall. Originally a 1,000 seat single screen, the theatre was twinned in October 1974.

After closing as a full time theatre in 1991, a comedy club took residence in the venue through 1993, sporadically operating one of the screens for independent films.

Sitting vacant for over a decade, the building was razed, along with the rest of Western Plaza, in the summer of 2007.

Photo and ads can be found on this page:
http://www.amachron.com/amarillo_graffiti.htm

I took that photo of the Western Plaza Cinema February 12, 1969. I was on my way to see Zeffirelli’s “ROMEO AND JULIET”. The theater’s first movie was “THE GRADUATE” and I saw it 3 times in the next 2 days (March 29-30, 1968). When the theater was twined in 1974 there were still almost 500 seats on each side. February 7, 1974 I attended the first movie I had ever gone to by myself in Theater One. No one else came to the noon showing so I sat by myself in the empty theater for more than 3 hours watching “PAPILLION”. The theater went dark in ‘91 but was opened as Jolly’s Comedy Club in '92 with movies in one theater and live stand up in the other. The last movie I saw there was “BOB ROBERTS”, November 4, 1992. A couple of hotels now stand where the WP Cinema once was and the Western Plaza Mall is long gone, replaced by a new shopping center with restaurants all around. You’d never know it was ever there.

The $13-million Western Plaza Shopping Mall was announced in 1965 and General Cinema signed on the provide the theater there in summer of 1966. The theater was set to open almost 20 years to the date of the last Amarillo constructed indoor theater, the Esquire. Though the entire project fell behind by a year, the 1,000 seat General Cinema Western Plaza was an exciting addition to the area with the traditional art gallery and smoking loge. At the mall, the anchors of Montgomery Ward’s and the cinema’s neighbor Woolco had made it to the August 1967 target date and the other 21 of the other 23 businesses worked hard to meet the February 29, 1968 grand opening target date. GCC missed both dates but four weeks after the Mall’s grand opening, March 26, 1968, the Western Plaza Cinema was open with a film that played well throughout Texas in “The Graduate.”

As classes went back into session in 1973, General Cinema shut down to deliver twins at the Western Plaza. The theater re-launched on October 24, 1973 after a two month hiatus as the General Cinema Western Plaza I & II opening with “Visions of Eight” and “The Day of the Jackal.” The theater was now fully automated and had a slightly remodeled lobby area. The theater was likely on a 25-year lease and decided against a re-up as the mall was in flux with Woolco leaving, Sakowitz coming and going, J.J. Wilson coming and being replaced by Service Merchandise. A twin-screener just couldn’t compete in a multiplex world. In 2007, the whole complex was finally razed and replaced by Western Crossing, a $40 million mall.