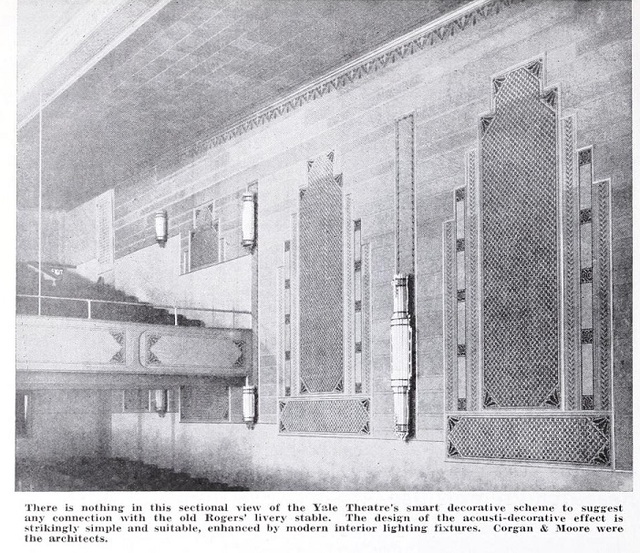 To view before & after shots type in word “yale”, then search,
View link

Claremore, Oklahoma, is an interesting and picturesque place.
This was Will Rogers birth place, hometown, and where he is entombed.
Claremore is the setting for two succesful Broadway plays that were also made into Hollywood films; “OKLAHOMA!”, and “Dark at the Top of the Stairs”.
Oklahoma Military Academy is located here.

It looks like this Art Deco theater in Claremore was on Western Avenue, according to the street sign. It was renamed to honor Will Rogers in 1947. Is this the Yale?
http://tinyurl.com/6rrnvl

YES! That photo link posted 11-28-08 is an image of the OKC Will Rogers Theater located on Western Ave.

The Yale Theatre was indeed located in a former livery stable, and the stable had been built in 1902 by Clem V. Rogers, Will Rogers' father. In 1915, it was converted into a garage, and soon after that into a movie theater, according to this Boxoffice magazine article of August 20, 1938. The drastic Deco/Moderne makeover done in the 1930s was designed by the Dallas architectural firm Corgan & Moore.

The Yale closed on Feb. 22, 1975, according to a March 24 Boxoffice article. “The Yale Theatre was originally a livery stable built by Clem Rogers, and later owned by his son Will. In 1922, Will decided to sell the building. When no owner could be found immediately, the building was leased and turned into a theatre. The Yale Theatre was sold in 1926 to the Robb and Riley interests. … At another time in its long and colorful history, the Yale was purchased by the mysterious Howard Hughes, who kept the property for a few months before selling it to the L. C. Griffith Amusement Co. of Oklahoma City.”