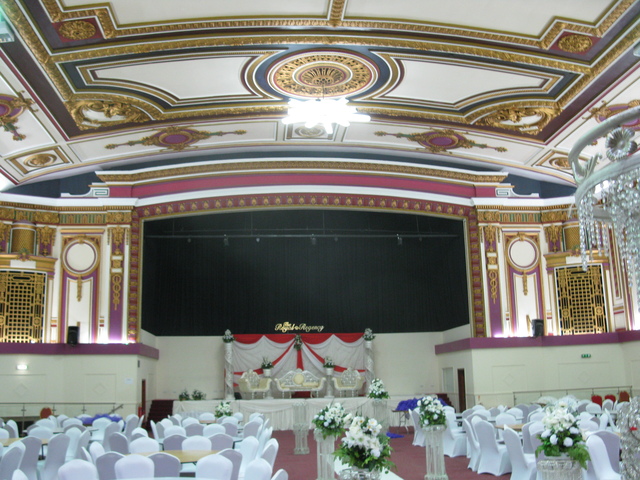 Located in the east London district of Manor Park. The Coronation Electric Theatre was opened in 1911 and was designed by architect Stanley Burwood. It had a seating capacity of 600 and was operated by the Frederick’s Electric Theatres circuit.

It closed as the Coronation Picture Palace in 1920 and was substantially enlarged to become a ‘super’ cinema of its day to the plans of architect Clifford A. Aish. It re-opened as the New Coronation Cinema on 28th May 1921 with Mary Pickford in "Pollyanna". Seating for 1,904 was provided in stalls and circle levels and the auditorium was decorated in a flambouyant Baroque style. There were full stage facilites with the proscenium 36 feet wide, stage 20 feet deep, and three dressing rooms to provide for variety performances to accompany the film programmes. It was equipped with a small organ and had an added facility of a cinema cafe.

It was owned and operated by Abraham’s Suburban Super Cinemas Ltd. until October 1929 when it was taken over by Associated British Cinemas(ABC). It was at that time when the cinema was wired for sound and it became one of the first in the area to screen ‘talkies’. A new organ was installed in 1932 which was a Compton 3Manual/8Ranks (divided). Stage shows ceased in 1938 and the cafe was closed during the war in the early-1940’s.

The Coronation Cinema continued under the ownership of ABC until it was closed on 23rd November 1968 with Jim Brown in "The Split" and James Garner in "Woman Without a Face"(Mister Buddwing). It was converted into a Mecca Bingo Club which opened in January 1969. All freshly painted in the lurid ‘Mecca’ colour-scheme, the Baroque style interior was actually enhanced by this treatment.

Mecca bingo closed in early-1985 and in July 1985 it was converted into a snooker club which remained open until around March 2008. The snooker club only used the former stalls area and a false ceiling was suspended over from the front of the circle to the stage. Nothing of the elaborate plaster decoration could be seen from within the snooker club area, but it was all still there (although deteriorating), if allowed to be viewed from the former circle. Unfortunately, the management would not allow access, due to pigeon infestation (their reason) which makes it too dangerous to enter under health and safety laws.

The snooker club closed in around February 2008, and the building was empty and unused. In December 2009, the building was re-opened as the Royal Regency banquet hall, catering for up to 750 guests. The exterior of the building has been re-painted. Inside the auditorium, the false ceiling and sub-division have been removed to reveal the original ceiling and decorative balcony front. The right-hand side-wall decoration was badly damaged, as was the left-hand side wall of the proscenium. The auditorium decorations have now been magnificently restored, retaining the ‘Mecca’ colours. It is a ‘work in progress’ by the current owner Abdul Bari, who has dedicated two years work to restore the building. In 2012, the circle was brought back into use.

The former Coronation Cinema is a Grade II Listed building.

A vintage photograph of the ABC Coronation Cinema from January 1952:
View link

I can confirm that the snooker club has now closed, it closed around two months ago. I had no idea about the buildings history until I stumbled across this page. It now explains why the snooker club only occupied the left two thirds of the building. It’s sad that the building is known in the area as a hot spot for drug dealers, and only wish someone could restore the place to it’s former glory, the area would benefit much from it. I find the buildings history truely fascinating and will be watching to see where its future lies.

By the way, does anyone know where I could find some photo’s of the interior when it was a cinema?

I recently went past the building (Jan 2009), the paint job has been changed, and it seems to have been reopened as some sort of venue, but I have not gone inside. I do not live far from it, but there is little for me to do over there and I work full-time so don’t get the time to go there. It has either re-opened as a social club or a music venue, but I think whatever it has been turned into, it would soon go back into disrepair. I may take some pictures of the exterior and post them here. As it is open now, maybe it would be fun to go inside and see what it’s like.

The famous Coronation cinema has reopened as a banqueting Hall named The Royal Regency. Most of its old glory is restored by its new management.

I remember, as a child, seeing the George Cuckor/Judy Garland version of “A Star is Born” at The Coronation. We lived close by, on Dersingham Avenue. This would have been about 1956 I would say. I hated the film too and walked out, waiting in the foyer until my parents came out after the film had finished. I was probably about 12 at the time. Ten years later I was dragged to see a revival of the film at the NFT by a girlfriend, and it’s now in my top ten American films. How times change one.