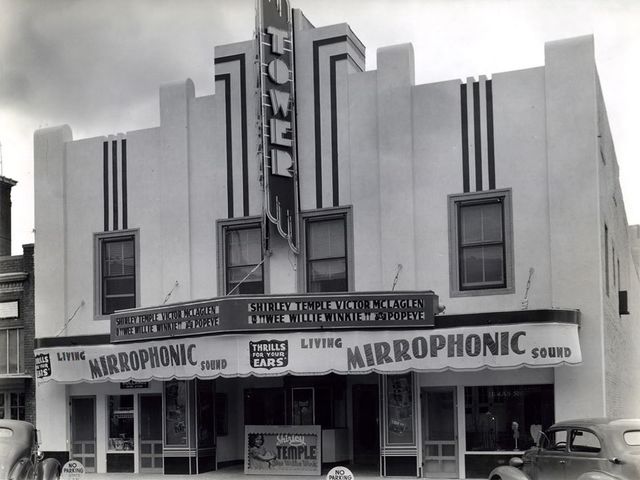 A true treasure of Art Deco style architecture was the 702-seat Tower Theater. It opened in 1937 Exterior and interior decorative detail were well balanced, without losing that special “promise” only an Art Deco style could deliver. It was destroyed by fire on December 11, 1944.

Want to know what the OKC Villa Theatre originally looked like? Then look at this cinema, for the Tower was sister to the Villa (a balcony enabled the Villa to have larger seating capacity).

The original Tower Theatre in Drumright, opened in 1937 by the Griffith Amusement Company, burned on December 11, 1944. Rebuilding was delayed due to wartime shortages. Boxoffice Magazine of March 30, 1946, announced that the opening of the rebuilt Tower was scheduled for April 12 that year.

1937 photo added credit Griffith Amusement Company Collection 21500.63.1, courtesy Oklahoma Historical Society. One comment said it was on the North side of Broadway a half block West of Pennsylvania Avenue. Couldn’t find anything that looked like it or it’s neighbor based on the 1937 photo. No address in subsequent searches.