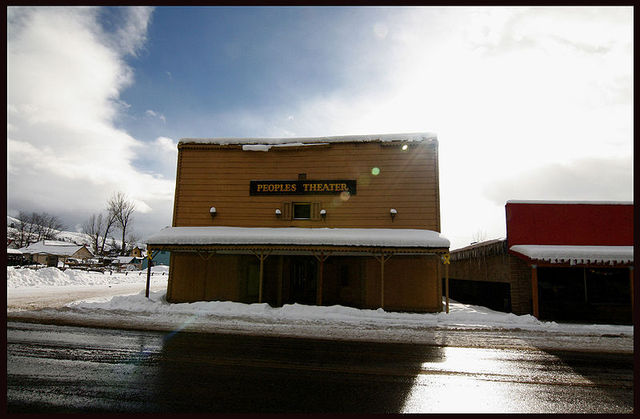 A picture of the Peoples Theater: View link

The Peoples Theatre was open prior to 1925. It was renamed the Council Theatre in 1933 and by 1936 it was back to its original Peoples Theatre name. The theatre remained open into at least the early-1960’s

The People’s theater was being mentioned in the Adams County Leader at least as early as 1918. The paper’s issue of Oct 9, 1936 reported that the People’s Theater’s floor had been rebuilt on slant instead of flat as before, and that work on a new front was to start the next week. The December 4 edition reported that new seats had been installed in the theater. Another complete renovation was undertaken in 1940, reported in the February 16 issue.

On March 18, 1960, owner-operators of the house Mr. and Mrs. Joe Hancock reported that they might have to shut the theater down due to lack of patronage. But the June 23, 1961 issue of the Leader said that California theater operators Mr. and Mrs. George R. Cheverton and their son Richard had bought the People’s Theatre and the Rio Theatre in Cambridge and would move to Idaho to operated them.

A Mr. and Mrs. Richard Holliday bought both theaters from the Chevertons in 1967, as reported in the September 28 Leader. The People’s was still in operation at least as late as May, 1973, when yet another change of ownership was reported in the May 18 Leader:

“Mr. and Mrs. Ellis Wallace are taking over management of the People’s theater, beginning May 21. Mr. and Mrs. Robert DesMarias have made some improvements at the theater during his vacation, and Mrs. DesMarias will leave for their home in Anchorage, Alaska May 23.”

That was the last mention of the theater I’ve been able to find.