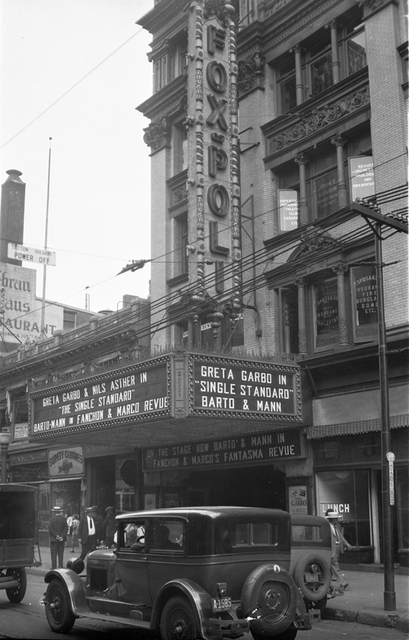 The Poli in New Haven was the flagship for Loew’s New England theaters and the regional offices were in the Poli Building. Harry Shaw was regional manager in the 1950'and Morris Rosenthal was manager of the Poli until he retired in 1958. Sid Klepper was the manager after Rosenthal.

Mickey Rooney and Judy Garland visited the theater for an onstage performance on 10 August 1939.

Max Brunswick, whom ushered there as a high school kid, cites the house as seating 3200.

a great theatre—they don’t make em like that anymore..

Click here for an exterior view of the Fox Poli Theatre in 1929.

I have a letter written to my husband’s grandfather by his brother-in-law, Clement Doran, and he was in a show at the Poli’s Byon Theather in New Haven Ct., April 22, 1909. Does anyone have any ideas about where I might find out the name of the show or any write-up/pictures?

My great grandfather, John J. Gentile managed this theater back in 1917 according to my family history. Also, his daughter, Madeline-Gentile Ortello, who is my grandmother played the piano for the silent movies. I believe the theater was originally called Comique.

My father Bartolomeo Tammaro Sr. Was a projectionest in the Poli
For a number of years and did the closing show. I was was an usher at The Poll and the Biju. I would like to hear from anyone

The June 10, 1916, issue of The American Contractor had this item about the Poli Theatre in New Haven:

The alterations and additions were to a theater that had been built in 1905. This notice appeared in the February 18, 1905, issue of The American Architect and Building News:

Another item in another issue of the same magazine said that the theater was being built behind 23 Church Street, so the office building probably predated the theater. Page 94 of Legendary Locals of New Haven, by Colin M. Caplan, has a c.1905 photo of Poli’s Theatre (Google Books preview.) The house was advertised as Poli’s New Theatre to differentiate it from an earlier Poli’s Theatre in New Haven.

The theater was virtually gutted for Thomas Lamb’s rebuilding in 1917. The only photo I can find depicting any of E. W. Maynard’s original 1905 design is on a postcard that is displayed on this page of a stamp collecting web site. As the card is for sale I don’t know how long the link will last.

hello we are making a documentary on Poli and Poli’s theater, and we are looking for anyone who worked there or used to go to Poli’s theaters often. Please email me () we want to hear from you. Luca

I have added the photo that ‘inspired’ the postcard image seen here. The ‘1905’ photo that Joe Vogel references is actually the same photo, and as it appears to feature a Model T Ford, it is probably closer to 1910 after all.

I am curious about Poli’s earlier theatre across the street, known as Poli’s Wonderland Theatre, a vaudeville venue and wax museum which he started in 1893. I’ve gleaned from the web that the structure was previously St. Mary’s Hall, and had apparently been used as a church up until 1878. If anyone finds out anything further, please post it!