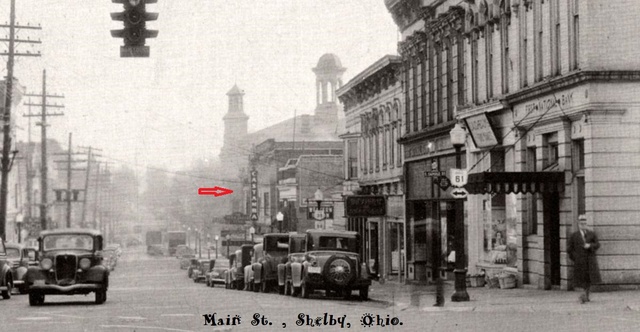 The Castamba Theater was part of the Schine Circuit by 1941, and they continued to operate the theatre into the early-1960’s.

This is from the Mansfield News-Journal on 3/26/73. Address should be changed to 36 W. Main Street.

The Castamba Theater was owned by Mrs. Merlin Moore of Tucson, Ariz., Mrs. Ross Purdy of Miami, Fla., and Arthur Shreffler of 12 East Madison Ave. Britt said the theater would add over 5,500 square feet of additional floor space to the store on Main St. downtown. Exact plans for remodeling the building have not been completed, but the store will be combined with the theater as one building and not an annex. The Britts and Ashtons also own the Willard Ben Franklin Store in another partnership.

The Castamba Theater closed its doors last November after 54 years of operation as a moving picture theater under the Shreffler family management. Shreffler, who managed the theater with his wife, Pauline, had to undergo an operation on his eyes. The theater was opened by Shreffler’s father, Hal D., and a partner, Frank Allwein of Shelby, in 1918. Both men are now deceased. The elder Shreffler had associated with Allwein in the theater business in the old Opera House on East Main St. at the intersection of Broadway since 1911.

Shreffler joined his father in the theater business in 1930 and has been associated with it for 43 years. The 45 by 120-foot theater building seated up to 735 persons with an addition added to the west in 1937.