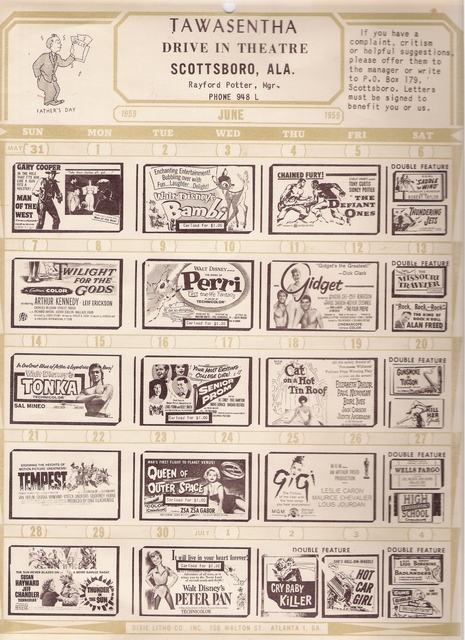 Opened in 1950. This drive-in was part of the Word Theater chain in 1963. Capacity was 350 cars. Tawasentha is an Indian word that can be found in Longfellow’s "Song of Hiawatha". The drive-in was closed in the mid-1980’s.

Where did the unusual name come from and how you say the name of the drive-in?

There are no “reservations” in Oklahoma. The tribes own the land outright which is a major difference.

The Cherokees started moving into “Indian Territory” (eastern Oklahoma) in the mid-1820s (including Sequoyah). The rest of the tribe was forced in the late 1830s to move into the region, going along the “Trail of Tears” that caused thousands of deaths.

By the early 1840s, most of the Cherokees has moved with a small band remaining in Georgia.

This Drive in theater took up the property between dump road and up to and including what is now a business called Thomas signs. Lat and Long of 34.710521, -85.972520 puts a pin in about the center of it on google maps. Their is a 1981 Aerial on historicaerials.com

Wonder if I could still send a criticism to that PO Box # it would read Why did you sell out.