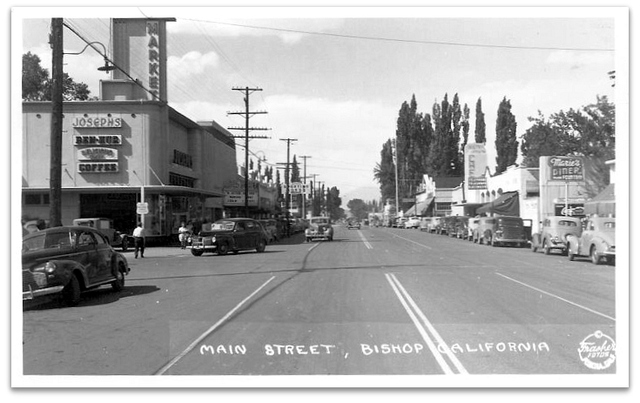 Replacing the former Holland’s Opera House/Bishop Theatre, which was destroyed by fire on January 6, 1924. The 400-seat Bishop Theatre was opened by 1929. It was remodeled in a Streamline Moderne style in 1947. It was later twinned (possibly in the 1970’s).

I had to drive to Lone Pine once back when I was delivering packages. I remember a theater on Main Street, which was the only real business avenue in the town, but that might have been in Bishop. I think the two towns are pretty close.

The theater is visible on the right in this undated photo:
http://tinyurl.com/djmw9f

Currently closed for renovations and new seating. Pictures with article.https://bishoptwintheatre.com/

The original Bishop Theatre, also known as Holland’s Opera House, was a large, wood framed building that was destroyed by a fire on January 6, 1924. The present Bishop Theatre was the replacement for that house. In 1947, Harry Holland had the theater remodeled, as noted in the May 10 issue of Motion Picture Herald. Unfortunately, the impressive Streamline Modern front the house got at that time has since been covered by a false front featuring two upper floors of fake windows for rooms that don’t exist. Bishop is apparently one of those towns that destroys its real history and replaces it with an “olde timey” look that only the hopelessly naïve would mistake for actual historic design. Other buildings along Main Street appear to have suffered similar sad transformations.

Here is an item about Harry Holland from the April 14, 1945 issue of Boxoffice:

“Traveling as a ventriloquist with a medicine show wagon in Texas, was Harry Holland’s initial appearance in the theatrical world. In 1911 he joined a troupe engaged for a week at the Bishop Opera House, Bishop, Calif., and at the end of his engagement decided to stay there. Going into business for himself, Holland opened his first house, the Gem, converted from a vacant shoe shop. It featured three single-reel subjects and two illustrated songs. Admission was ten cents. Later he built the present Bishop Theatre. He has two sons in the service.”