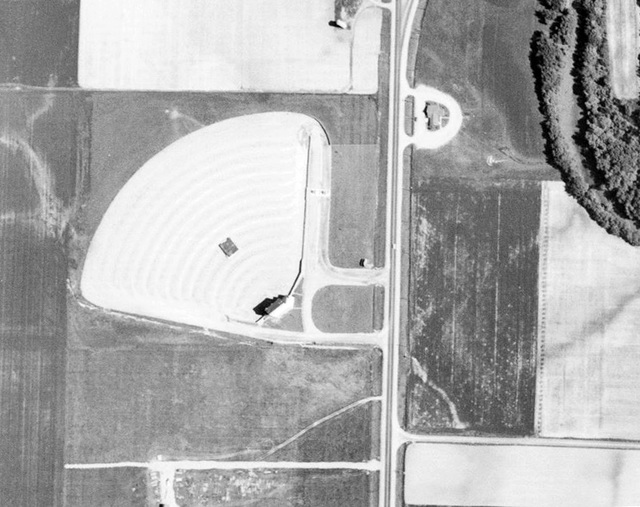 A new metal screen tower was built in time for the 1960 season. It was closed on September 25, 1963 with “Female Butcher”, “Boody Pit of Horror” & “Body Snatchers From Hell”.

Any comments or questions regarding any drive-in theater in Wisconsin, please check out my website at
www.drive-inthruwisconsin.com Or contact me at I will give you complete and accurate information about Wisconsin drive-in theaters, just ask. Thanks, Charles Bruss

Yes IT PARKED 500 cars.And was owned by S&M Theatres,Inc. Okay,TLSLOEWS make the cute comment about the “owners”.

I wont go there.

This drive-in was (actually where the parking lot is today) south of Pierce Manufacturing. Approx. address 2600 American Drive. If you look closely on aerial maps, you’ll see the old frontage road for the highway.

Actually it originally was a 680 car drive-in and also included a playground.

Grand opening was on April 30, 1949 with “Relentless”, starring Robert Young and Marguerite Chapman. The original wooden screen tower was destroyed by a fire caused by an electrical fault on the morning of September 9, 1959. A new steel tower was installed in time for the 1960 season. Final night of operation was September 25, 1983 with a trio of horror flicks: “Female Butcher”, “Bloody Pit Of Horror” and “Body Snatchers From Hell”. The site is now occupied by Pierce Manufacturing Inc.