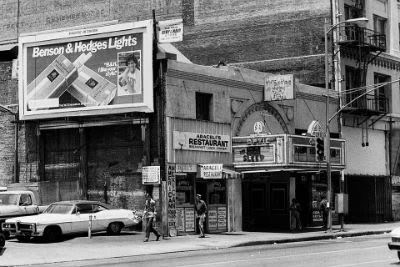 One of many independent theatres in the S. Main Street section of downtown Los Angeles, this old 700-seat movie house was situated next to the Art Theatre and across the street from the Burbank Theatre. The Optic Theatre was opened by August 1915. It was equipped with a Murray M. Harris 2 manual organ which was opened by organist J. Whaley Ford. It was listed as operating in the 1926 edition of Film Daily Yearbook.

It was still open in 1979. In its last years, it ran a grind policy of four films and was open all night until about 4-5 in the morning.

Now a parking lot has taken the place of all three of these theatres.

My USC links have all changed again, too, so here’s the current link to the wide view of the original Optic Theatre on Broadway (located at lower right of the photo.) There is also this cropped version with the Optic in close-up.

Note that just up the street the Broadway Central Building, later to become the location of the Broadway Theatre, is under construction.

Here is a nice view of the Optic in the late 1930s. The Star is next door. There is another theater a bit north.
http://tinyurl.com/d6c6uo

I believe the Optic as well as the Regent, Liberty, Lyceum and Kinema Theaters were all part of the West Coast Theater Chain operated by the Gore Brothers – Mike and Abe. All of their brothers and family were made managers of theaters. From the LA Times, December 11, 1920, Herman Gore is being sued for divorce by his wife of 16 days, Ruth. “She declares he earns $110. a week as Manager for Optic and Regent Theaters; also that he has an interest in the new Ambassador Theater being built in Hollywo0d, and the Liberty, Lyceum, Kinema Theaters.

I believe that it is The Optic that is shown in the opening credits of The Rockford Files. They are showing Point Blank. Seems like a Jim Rockford kind of neighborhood.

Just caught a glimpse of the Optic in a 1981 episode of “Hill Street Blues” titled “Hearts and Minds”.

Add Starsky and Hutch to the list of shows with the theater in the background. Season 1, “The Bait.” 1975