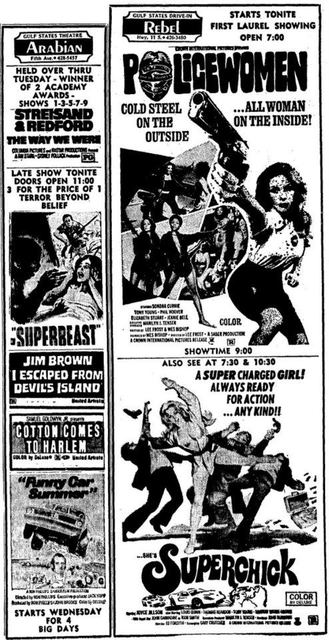 The Arabian Theatre opened on April 1, 1927, built for the Saenger chain it had a seating capacity of 1,200. It was located next to the Pinehurst Hotel, which has since been demolished. After closing as a movie house in 1976, the Arabian Theatre was acquired in 1977 by the Laurel Little Theatre company, which dates to 1961.

As the Arabian Theatre was built for movies only, the theatre group had to build a stage and dressing room areas as well as a new proscenium arch. Also, half the seats on the orchestra level were removed. The color scheme of the theatre was also restored to its original appearance.

In addition to live theatrical productions from the Laurel Little Theatre, the Arabian Theatre has played host to concerts, beauty pageants, and various community events.

a couple updates on this theatre…..most of what was originally written here about the Arabian seems to come from a city website that contained these errors…….hope that it can be changed to get the info all corrected……

**it’s actually still called the Arabian, but our community theatre group Laurel Little Theatre now owns and operates it for live performances…..probably would be best to retitle this venue and list it under “Arabian”

**the text posted says the theatre sat vacant since the 60s, but it was actually operated as a movie house up until 1976……it was vacant just a year when we bought it and renovated as our own Laurel Little Theatre opening in 1977

**there is no screen in the house at this time, our group does 4-5 live stage shows each year and then the place is also used for other performances, meetings, concerts by various other groups

**style of the house is Moroccan and Egyptian

**i have many other photos of the Arabian on our group’s website…LaurelLittleTheatre.com

A.L. Royal ran this theater as well as several others in Mississippi, most of them named Royal, as part of his eponymous circuit in the early 1960s.

Here is a July 1965 ad from the Laurel Leader-Call:
http://tinyurl.com/ylnphpu