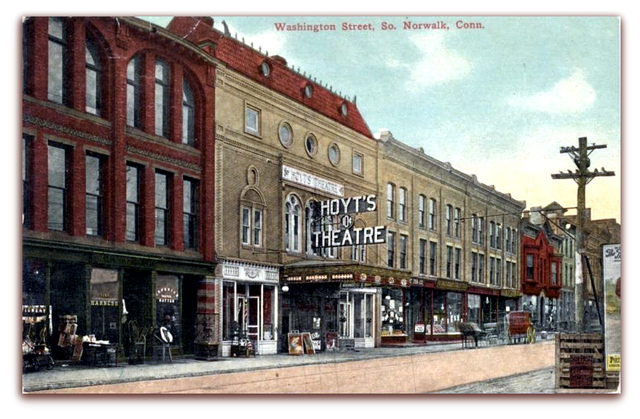 First listed in the City Directory in 1893. In 1910, Hoyt’s Theatre is still listed at same address at 130 Washington Street.

By 1923, it was listed as the Rialto Theatre. Operated by Warner Bros. Circuit Management in 1940. In 1941 it was remodeled in an Art Deco style by interior decorators Riseman & Lercari, under the personal direction by Warner Broths designer Herman Maier.

The Rialto Theatre closed in 1961.

The auditorium has been converted into apartments, and the lobby and adjacent storefronts serve as a restaurant/bar. The facade is in tact and still recognizable as a theater.

Here are some answers on this one: The theatre was built in the late 1870s by Mortimer Hoyt, hence the sometimes name of Hoyt’s Theatre. It was officially called the Rialto Theatre. It closed in the fall of 1959 due to declining attendance associated with the rise of television. An October 24, 1959 NY Times on the history and closing of this theatre (including its time as a movie theater) can be found at this link, but it is normally a pay link.
View link

It is a thriving restaurant today in South Norwalk.

It was run by Warner Brothers when a moviehouse.

Here is a link to another pay NY Times article describing the first pre-release adventure movie showing of 1923s “The Bright Shawl”. Director John S. Robertson of “Dr. Jekyll and Mr. Hyde” fame was in the audience at the Rialto Theatre then.
View link

Under South Norwalk in the 1897-98 edition of the Julius Cahn Official Theatrical Guide is listed Hoyt’s Theatre, I.M. Hoyt, Mgr. Seats: 1,160. Ticket prices 25 cents to $1. It had both gas and electric illumination. The proscenium opening was 33 feet wide X 28 feet high, and the stage was 38 feet deep. The auditorium was on the ground floor; there were 5 members of the house orchestra. There were 3 newspapers and 3 hotels for show folk. The 1897 population of South Norwalk was 19,000.

From Norwalk a postcard image of Hoyt’s Theatre.