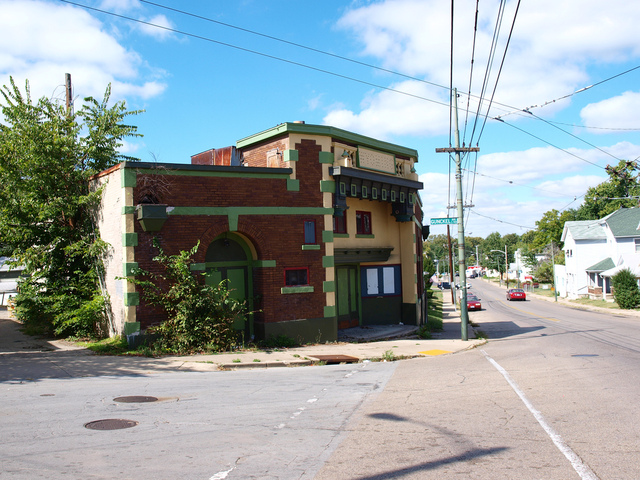 The Wyoming Theater was built on the southwest corner of Wyoming Street and Gunkel Avenue in 1914 by Albert Staehlin. A baker by trade, the theater business must not have suited him, for the following year he sold the property to real estate investor Gus G. Kinzeler.

Kinzeler, one-time owner of Funland Theater on Valley Street, did quite well during the decade he owned the theater. When attendance began to decline, Kinzeler sold his interest in the Wyoming Theater to Samuel D. Crumbaugh in 1925. When the downtown Colonial Theater introduced the first all-talking, full length picture “Lights of New York” on September 22, 1928, it sounded the death knell for many of the remaining small, silent theaters. Without the funds to purchase the equipment needed for this new form of entertainment, the nickelodeon’s days were numbered. The Wyoming Theater was no exception, closing its doors sometime in 1929.

The theater remained vacant for several years then became the Silver Slippers tavern, a place where dances were held and included meals. In the 1930’s, John Schaub bought the property and opened a restaurant. Over the next few decades, the building switched to become Kelly’s bar, remaining a restaurant and tavern until finally closing in 1983. Records seem to indicate that it has been vacant ever since. Curt Dalton spoke to one of the owners around 1997 and was told that the building was being used for storage.

I just got back from the Dayton Amateur Radio Convention. This is what I saw. There is graffiti now in a light beige on the dark brown painted wood covering/protecting the front.

Did this years convention too. Got a picture this time. Looks like somebody painted the joint. Picture on Cinematour.

Wyoming – Southwest corner of Wyoming Street and Gunkel Avenue (1914-29): The Wyoming was one of the most successful silent film theaters in the city. The Wyoming was erected by Albert Staehlin, a baker by trade, in 1914. A year later real estate investor Gus. G. Kinzeler bought the theater. Kinzeler, one-time owner of Funland Theater on Valley Street, did quite well during the decade he owned the theater. When attendance began to decline, Kinzeler sold his interest in the Wyoming to Samuel D. Crumbaugh in 1925.

i just found three old tin cans with the movies intact from the Wyoming Theater.Also have tickets to enter for 15 cents adults,, and 10 cents children.they are a notice of under new management ,or actual tickets i am not sure.anyone interested let me know.i am not sure of the movies in them or the age? thanks,Pat

Just came back from Dayton yesterday and she’s gone. By the looks of it, the roof finally collapsed by May of 2012 and they hauled her off by October 2013.