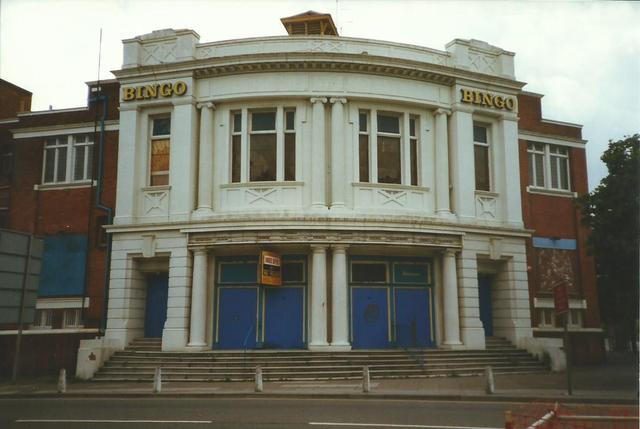 The Plaza Cinema is located in Southsea, an adjacent town to Portsmouth, Hampshire, and is at a major intersection of Bradford Junction and Victoria Road North. It opened on Saturday 29th September 1928 with a special invited audience viewing the film ""Baby Mine" starring Karl Dane and "The Elephants Elbows". On Monday 1st October, it opened to the public with Alice Terry in "Garden of Allah". It was built for and operated by independent operator Frank J. Spickernell.

It was designed by the local Portsmouth architectural firm Henry J. Dyer & Son and had a splendid Neo-Classical style façade. Set on the corner, the entrance had 4 Doric pillars and on the first floor was an open balcony with 4 more Doric pillars.

Inside the auditorium seating was provided for 1,331 in the stalls and 384 in the circle. The interior decoration was of an Atmospheric style with an Italianate setting. The plastered walls had painted panels the work of noted interior designer Eugene Mollo, on the left wall were views of an Italian garden, viewed through an open colonnade and on the right wall was views of the Grand Canal, Venice, again viewed through an open colonnade. There were clever lighting effects to simulate sunlight and moonlight and there were cloud effects on the ceiling.

On 28th January 1929, the Plaza Cinema became the first in the Portsmouth area to screen a talking picture, and "The Singing Fool" with Al Jolson packed the house for several weeks.

From 10th February 1931 the Plaza Cinema was taken over by Gaumont British Theatres/Associated Provincial Picture Houses(APPT) and it continued to prosper for many years.

It was re-named Gaumont from 8th May 1950 and was closed by the Rank Organisation on 30th January 1965. In February 1965 it was converted into a Top Rank Bingo Club. Sadly, the painted panels on the auditorium were painted over. In 1995 it became a Gala Bingo Club which closed in early-1997.

The building remained empty and unused. A fire occurred in September 1999 which badly damaged the building. It is thought to have been started by children playing in the near derelict building. Chandeliers and fittings had been stolen by burglars in previous months. The building had been purchased by Portsmouth’s Muslim community who were hoping to use it as a community centre. The building has now been rehabitated as the Jami Mosque.

The former Plaza/Gaumont was designated a Grade II Listed building by English Heritage in 1995.

Thanks for these very interesting facts Ken. My late father Fred Gompertz managed the theatre for the Rank Organisation from State Theatre to 1962 before being sent on to manage the Odeon Cosham from ‘62 until he retired in 1972. My memories of it (as a 12- 14 yr old!) are of a very vibrant Saturday morning club and a stage that was very high (almost like a music hall). Sadly dad died in 2012 aged 105! Thanks once again. Keith Gompertz