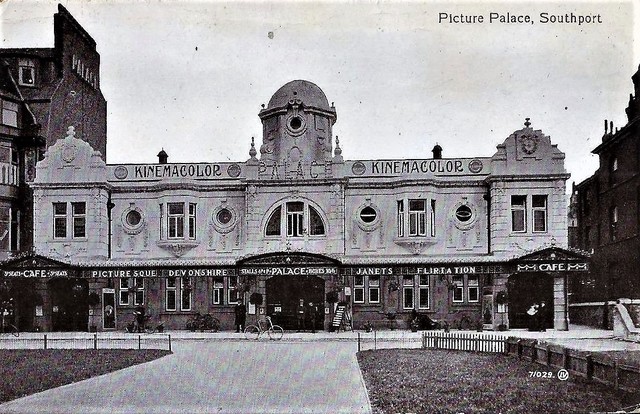 The Picture Palace opened on 29th May 1911 with "A Tale of Two Cities". It was one of several cinemas in the town which would be designed by local architect George E. Tonge. The exterior of the building was a splendid example of an Edwardian Baroque style. The façade was faced in white tiles and had many windows along its length. There was a highly decorated central dome feature over the entrance. The auditorium ran parallel behind the façade and had a seating capacity for 900. There was a café which was located on the first floor which ran the length of the building, hence the need for many windows on the façade.

In 1929 the Palace Cinema closed for a major re-construction, again to the designs of architect George E. Tonge. The roof was raised and a balcony was inserted. The former café then became the balcony foyer. Seating was now provided for 1,053. It re-opened as the Palace Cinema on 3rd March 1930 with Maurice Chevalier in "Innocents of Paris".

The Palace Cinema became the first independently operated cinema in the UK to screen "Around the World in Eighty Days", which ran for 11 weeks in 1958. It came under the control of the Essoldo chain in 1960 and was re-named Essoldo in March 1971, but they were soon taken over by Classic Cinemas chain and it was re-named Classic Cinema in 1972.

Classic’s embarked on another modernisation on May 9, 1974 when they converted it into a twin cinema. The former balcony was extended forward and had seating for 400, with the former stalls now a 500 seat cinema. All the work was carried out with loosing a performance, but it did loose its original Neo-Classical style decoration!

It was taken over by the Cannon Group in the 1980’s. Later operated by ABC cinemas in a management buy-out, the cinema was closed in January 2003.

It was sacrificed in the name of ‘progress’ despite the façade being designated a Grade II Listed building and protests from the Cinema Theatre Association, and was demolished in November 2005-January 2006. The Vincent Boutique Hotel has been built on the site, which opened in March 2008.

I am amazed at looking at the theatres over in England,they are just so classy looking.Shame to tear it down.Thanks Ian and Ken.And Philip.

The picture above is of the Classic Cinema, which is now the Vincent Hotel. It is NOT the ABC Cinema. The ABC was further down near the beginning of Lord Street, whereas the Classic was outside the bandstand, at the junction of Eastbank Street. Please correct this error and remove the photo. If you have a true picture of the ABC then use it, but this is the wrong picture and is a completely different building! I have lived in Southport my entire life and visited both cinemas many times. I know exactly that this is incorrect.

Further to my comment above, and reading the narrative above, it perhaps is your heading that is simply incorrect. Picture Palace and Classic maybe, but it is not the ABC. I was disappointed because I was searching for pictures of the ABC and your link came up. Please therefore change the heading, which is misleading. Thanks

In its final days the Palace was indeed called ABC, as closed as such. There is a funny photo with a banner on the front of the building, reading: “For the last frickin' time, we are not the NBC”, which was the original name of the multiplex, which killed off the Palace/ABC. The heading is misleading, but perhaps it’s the policy of Cinema Treasures to list the final name.

SouthportMike, your link shows my 1980s photo of the Regal/ABC, posted before I learned to “watermark” my photos. Incidently, the multiplex wasn’t called NBC, but something similar – it’s now Vue.

Only just come across this website :) I loved the saturday morning pictures. The ABC was my favourite but we did go to the Odeon now and again. My mum used to give me 1/6d – 6d for the bus to and from town, 6d admission and 6d for sweets. That seemed a lot of money back the, think what you could get for that nowadays ha! .. Went to see Mary Poppins at the Grand there were so many people queuing when we got to the doors we got turned away as it was full, was so upset .. went back the next day and managed to get in I loved that film so much including Dick Van Dykes dodgy cockney accent ha ha!

Essoldo took over the Palace in August 1960, but didn’t rename it until 1971 (when they still put Palace in brackets after Essoldo). When Classic took over they referred to it as the Classic Palace until it began operating as a twin, which was Thursday May 9th 1974 with A Touch of Class in Classic 1 and The Big Boss in Classic 2. It does indeed seem that the conversion was carried out without closing, with advertising in the preceding weeks apologising for any inconvenience during structural alterations!