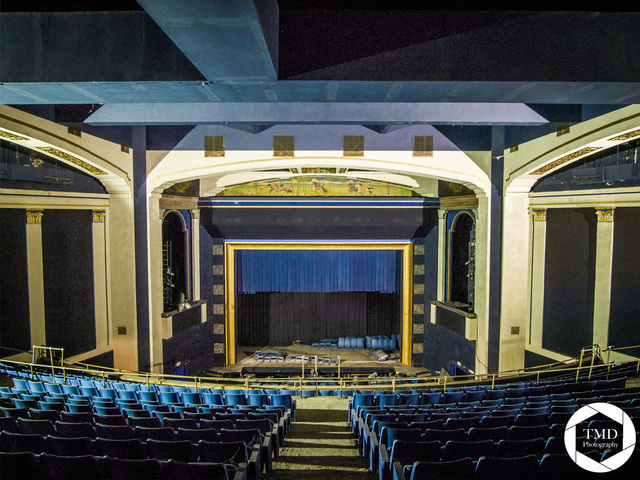 The Palace Theatre was opened prior to 1926 and was part of the Poli chain of theatres. It was listed with 3,100 seats. By 1941 it was listed as seating 2,344. By 1943 it was listed as the Roger Sherman Theatre, operated by Warner Bros. Circuit Management Corp. with 2,076 seats. It later became the Palace Performing Arts Center. It was closed and renovated to reopen as the College Street Music Hall in Spring of 2015.

This theatre is also listed in the John and Drew Eberson archives at the Wolfsonian in Florida as having alterations around 1944.

I have a recording of my grandfather, Frank Konitz, playing the pipe organ at the Roger Sherman in 1970 as guest artist for the American Theater Organ Society. In the introduction the MC states that in 1927 the theater was known as the Olympia. Can anyone confirm or deny?

The Paramount also had an organ that was still operational into the middle years of the 20th century. Most likely, the MC on the record conflated the two theaters in his mind and misspoke.

I took over temporarily as division manager for RKO’s Connecticut Division at the end of 1978 while running the Merritt Theater in Bridgeport. Although the company was managing commercial property in the building, movie showings had been suspended. We received a request to open for a religious revival and took the theater out of mothballs for it. The Reverend Bob Pulley (?) brought in the Edwin Hawkins Singers and a large staff for a one-off that was fascinating – speaking-in-tongues, curing the afflicted, ecstatic dancing etc. I left the chain shortly thereafter and haven’t seen the venue since. It was awesome to explore the empty theater and sub-basements when I got there. Lots of memorabilia and equipment had basically been abandoned when showings stopped.

This theatre will be reopening as a concert venue called the College Street Music Hall this spring!

saw the article. when toad’s place got in trouble with their ID incident, they were closed for 2 months. the rumor was that they would refurbish and move into the Palace as an annex. i got in there b/c a friend was helping remodel and saw the transformation. but the deal never happened.

this is good news.

Linkrot repair: here is the new location of the 1961 Boxoffice piece with the drawing of the Roger Sherman Theatre’s new front.

The new COLLEGE STREET MUSIC HALL will have 2000 seats. Hopefully they will be able to show movies also. It is a perfect venue for movie openings and showing classic films.

Wishing this theatre much success.

Additional photos of downtown New Haven can be found by searching the below site. Copy & paste to view.